UofL promotes food literacy and urban agriculture through gardens on all three of our campuses. Take a video tour of the Garden Commons!

Interested in health, sustainability, good food, and growing things?! We need your help to make our garden grow! The Garden Commons (southwest corner of Strickler Hall, adjacent to the Biology Department's Harriet A. Korfhage Native Plant Garden) is a community space for learning about organic urban agriculture, more sustainable food systems, and building resilient community. The Garden Commons is open to participation throughout the year from students, staff, faculty, and community members. Everyone who helps out is welcome to share in the harvest! 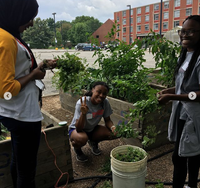 Garden Commons Summer Workdays
Fridays, 12pm-1pm
We are relaunching our weekly group workdays in UofL's organic Garden Commons in its new location at the southwest corner of Strickler Hall! Join us to learn (by doing) how to grow hyper-local, super-delicious vegetables, herbs, and fruits! Anyone can work in the garden any time, but we'll gather together every Thursday at noon throughout the remainder of the summer (July 16 - Aug. 13) to harvest, weed, water, and plant. No prior experience necessary. Tools & gloves provided. Please bring drinking water & bags to harvest into! Wear a mask and practice physical distancing to keep everyone safe during the pandemic. 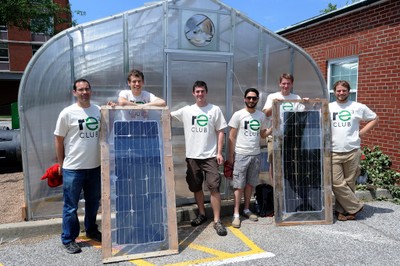 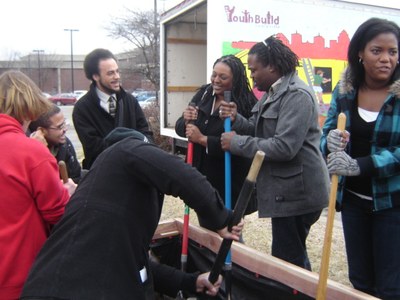 March 3, 2010 - UofL breaks ground on the Garden Commons in partnership with YouthBuild and Louisville Grows. 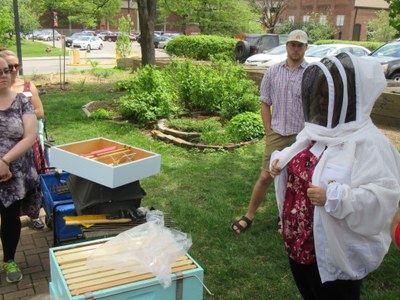 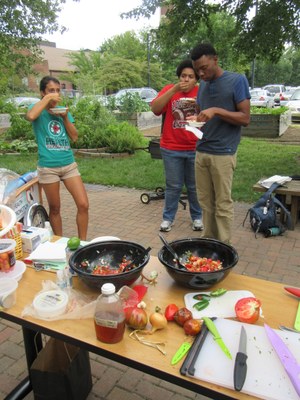 Students get a taste for sustainable gardening 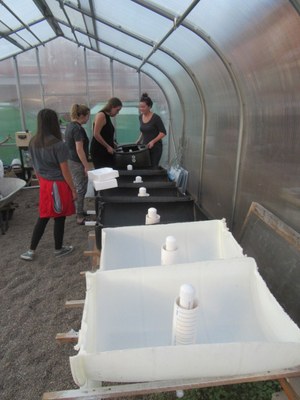 The Garden Commons has been host to an on-going series of workshops over the years. Workshops are open to all, typically involve some hands-on work, and have focused on everything from organic gardening practices (composting, rainwater harvesting, soil management, cover crops, natural pest repellents, seed saving, seed starting, compost tea, permaculture, intercropping, etc.) to harvest preserving techniques and cooking/nutrition to larger issues such as food justice and sustainable food systems. UofL's Sustainability Council has taken the lead to organize workshops, often in collaboration with the Office of Health Promotion and the UofL Eco-Reps Program

Garden at The Province 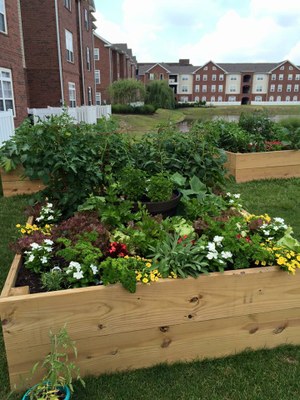 In Spring 2015, a new raised-bed community garden was installed by the Clubhouse at The Province, a UofL Affiliated Housing property on the northwest corner of campus. In summer 2015, a compost bin and rain barrel was added. The new garden features vegetables, herbs, and flowers and is intended for use by residents of The Province, who are welcome to pick fresh produce whenever they wish. All are welcome to regular workshops and tastings throughout the growing season. Stay in touch with events and developments in the garden via The Province's Facebook Page. The facility has featured a roof garden and greenhouse with vegetable beds since its opening. Once the UPA Horticulture Zone was created across the street in 2013, the children were taken on regular field trips to help plant seeds and taste the harvest. In spring 2016, UofL's lacrosse team helped install additional raised beds around the street-level outdoor play area so that kids can watch things grow as they play each day.

The Early Learning Campus is part of the Gladys and Lewis "Sonny" Bass Louisville Scholar House Campus and is an exemplary early child development center for children of UofL faculty, staff and students, and residents of the Louisville Scholar House. The facility is accredited by the National Association for the Education of Young Children (NAEYC) and offers full day curriculum for children aged six weeks to four years.

In the spring of 2011, dedicated nutritionists from the Weisskopf Child Evaluation Center (in the Kosair Charities Building at Floyd and Chestnut) decided to create a garden to benefit children receiving evaluation and therapy through the Feeding Disorders Program. The vision was that a garden would provide great opportunities for the children who are very restrictive in the variety of foods they will eat. By May 2011, the Feeding Therapy gardens were growing with tomatoes, sweet potatoes, and green beans sprouting from 3 square raised beds that were already in place between Baxter I and II. To learn more, contact Diana Pantalos. 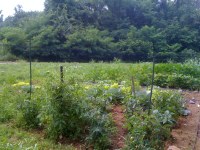 In 2011, dedicated staff at UofL's LEED Gold certified Center for Predictive Medicine on the Shelby campus planted a "Birthday" Garden to provide fresh produce to take the place of cake and ice cream celebrations for employees. Staff and researchers at the Regional Biocontainment Laboratory enjoy a bountiful harvest and have replanted each year. The abundance of produce has prompted staff to host fun related events such as chili cook-offs and pesto parties. The garden has expanded over the years and now includes a compost bin, raised beds made from repurposed pallets, and a vertical herb garden. To learn more, contact Marlene Steffen.

KPPC brings gardening into the office

In 2018, the Kentucky Pollution Prevention Center (KPPC) at UofL's Shelby Campus experimented with hydroponic gardening inside their office. KPPC has been an Advocate Member of the KY EXCEL program since its inaugural year in 2006. KY EXCEL is a free, voluntary program that encourages members to complete projects that improve the environment at home, within an organization, or in a community. There are various levels of tiered membership for participants that include for non-regulatory members – Farm and Advocate, and regulated members – Partner, Leader and Master. Visit the KY EXCEL website to find out more about being a voluntary member. In keeping with KPPC’s ongoing KY EXCEL Advocate membership, a sustainability project is identified annually that can improve the Center’s day-to-day operations and serve as a demonstration of the different ways to consider sustainable practices in the workplace for our clients.

ive way to encourage and demonstrate a commitment to environmental and social sustainability. Alex Beebe, a Speed School engineering co-op at KPPC, was assigned as the project lead for researching, designing, procuring, constructing and maintaining the hydroponic garden for the office space. “As a student co-op, it was an exciting opportunity to lead our 2018 Kentucky EXCEL project.” he said.

A deep water culture hydroponic system was selected. This was comprised of containers for the nutrient rich water, aeration equipment, a LED grow light, net pots and clay pebbles. KPPC staff donated some of the materials. The total cost of a four-container setup was around $200. A selection of herbs were grown from seed in soil and then transferred to the hydro system as mature plants where they thrived, yielding multiple harvests of mint, basil, oregano, and chives. Maintenance involved checking PH and nutrient levels on an every other week schedule that only required about ten minutes each time. Additionally, the herbs were harvested around the same time to prevent overgrowth and provide KPPC employees with a regular supply to use at home or share with others.

One of the project work objectives was to establish an online resource to assist others with bringing the benefits of this sustainability initiative into an office, classroom, home or any other appropriate indoor setting.

A hydroponic gardening web page has been created and is now available on the KPPC website. There is a frequently asked question (FAQ) styled layout of information about the project along with a promotional video, a slide presentation that can be used to share the story with others, along with additional resources including a Hydroponic Gardening Maintenance Guide.

“Initially, the project was to create a hydroponic garden for our own use within the office. As planning and construction occurred, we realized that this could serve as an example of an affordable, unique and time-conscious sustainability project for any workplace” said Alex Beebe. “Leading the hydroponic project gave me experience that engineering co-ops rarely receive such as video production, web page writing, graphic design and more. KPPC encourages utilizing creative projects to involve employees in a sustainable culture.”

Find out more about hydroponic gardening and the benefits it can bring to the workplace. 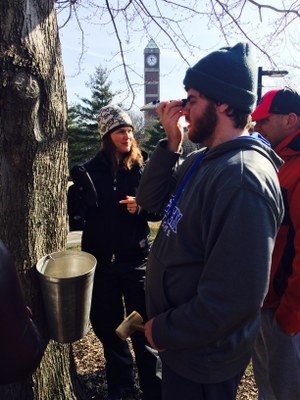 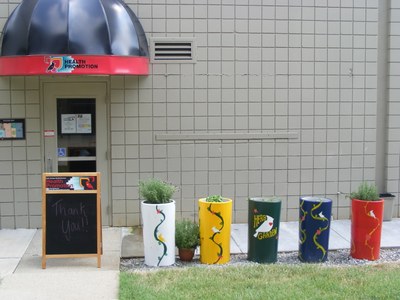