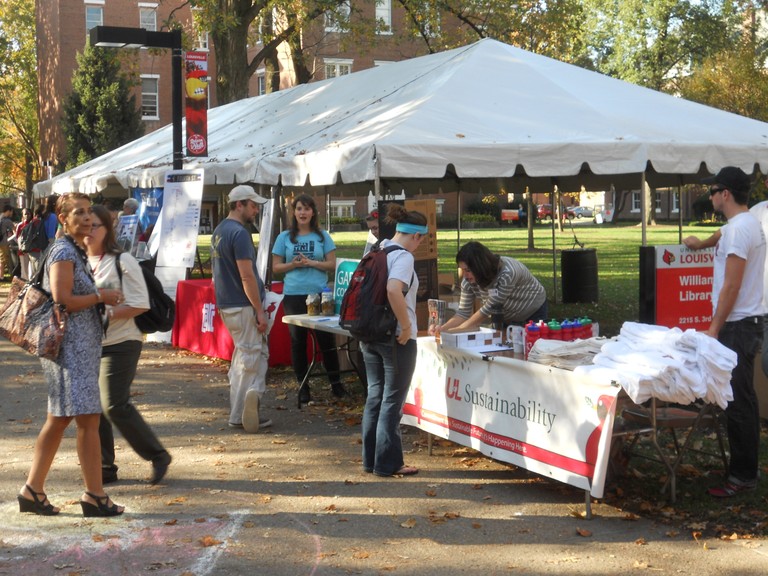 The University of Louisville’s 12th annual Sustainability Week featured over 30 sustainability-related events across the Belknap and Health Science Campuses.

The week is held each October to raise awareness for environmental issues, promote student engagement in eco-friendly initiatives and showcase career opportunities in sustainability.  The eight-day, multi-location production was the collaborative effort of the university’s Student Government Association, Sustainability Council, Office of the Provost, Dining Services, several RSOs and local nonprofit organizations.

It started in 2008 as a single day event, but sustainability week has expanded over the years as the university has made sustainability a central part of its long-term plans, assistant to the provost for sustainability Justin Mog said.

For the first time, Sustainability Week events spread beyond the Belknap campus to the Health Science Center.  The HSC events were spearheaded by the recently formed HSC Green Team, a group designed to address sustainability concerns related to the health field, Mog said. The events included a series of documentaries, free bike tune-ups and a professional development workshop presented by Mog called “Business as Usual is Killing Us: It’s Time for Institutional Weirding in the Age of Global Climate Weirding.”

The week included plenty of food for students, kicking off at the Red Barn with the Farm-To-Table Dinner, hosted by the university’s dining services and featuring a five-course meal created with locally-sourced ingredients. It concluded with a “Lunch and Learn” workshop, hosted by the Sustainability Council’s EcoReps program and featuring a free vegetarian lunch.

Additionally, over $600 was raised for U of L’s Green Fund, which goes towards implementing new campus sustainability initiatives, Mog said.

Throughout the week, numerous nonprofits and environmentally-focused organizations came to campus to raise awareness and promote jobs in sustainability and renewables.

“The opportunities for careers in sustainability have been expanding.  Most universities and many corporations and governments now have a sustainability coordinator or director,” he said.  “There’s been a big boom in interest and it’s encouraging to see.”

Sustainability week ended with some of its initiatives carrying over into Homecoming Weekend.

“For the Homecoming game, fans should see a new ‘zero-waste approach’ implemented to game days,” Mog said.  He said the approach is an attempt to eliminate all non-recyclables from within the stadium itself, including from vendors and fans.