The University of Louisville Sustainability Council is thrilled to present our 2021 Josh Smith Memorial Sustainability Award to Shauntrice Martin for her inspiring work for food justice. This Award, which includes a $250 cash prize funded by donors, is granted each year to a community member who has given back to UofL's Sustainability Initiatives in honor of an alumni, Josh Smith, who died unexpectedly on June 17, 2015 after giving so much of his time to UofL's Community Composting project. We honored Shauntrice with the Award at a brief ceremony during UofL's annual Farm To Table Dinner on October 14, 2021 (see photos, watch video). 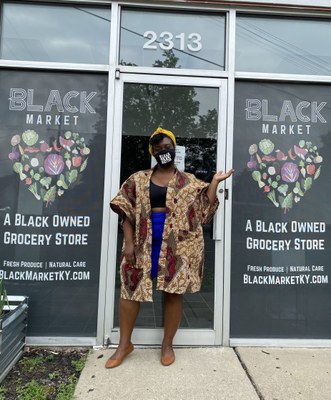 Shauntrice is an abolitionist in Kentucky. She is the director and the founder of #FeedTheWest, a food justice program sponsored by Black Lives Matter Louisville and Change Today Change Tomorrow. After studying food apartheid in Belize, Mexico, Trinidad & Tobago, and across the U.S., she started Black Market KY to address food insecurity in Louisville's west end. Shauntrice has earned numerous other awards including Louisville Forty Under 40, The Coalition of Black Excellence Impact Award, and Silicon Valley Business Journal Woman of Influence.

Her contributions to UofL's Sustainability efforts are myriad:

Nominations for this annual award can be made by anyone. Nominations are due by October 1st via email to the UofL Sustainability Engagement Committee Chair, Dr. Brian Barnes, at brian.barnes@louisville.edu. Nominees cannot be enrolled UofL students or current employees.