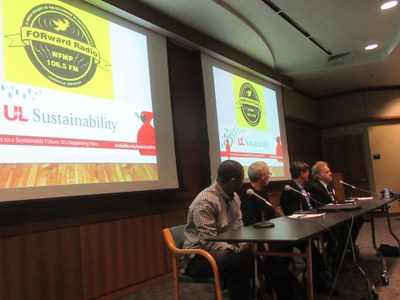 The theme of the evening was: Equal Opportunity & Justice: Racial & Economic Equality and Environmental & Food Justice.

This was not a typical candidate debate with antagonistic posturing designed to generate 30-second sound bites. Rather, we hosted a different kind of candidate forum, one expressly designed to stimulate, inform and uplift, rather than exhaust, confound and deflate. All registered candidates for Louisville Mayor were invited to attend.

At the conclusion of the Forum, participants joined us for cake and coffee to celebrate Forward Radio's first birthday on-air! Listeners helped shape this forum by voting on the topics and sharing specific questions that they wanted to ask of all our Mayoral Candidates at forwardradio.org. See photos here. Listen to a full replay of the Forum here: