"No Trump, No KKK, No Fascist USA" 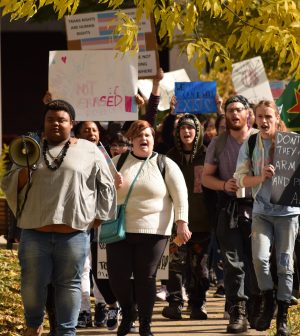 More than 100 students and faculty gathered outside the Student Activities Center Oct. 30 to advocate for trans visibility.

Protesters held signs with messages like “we have, can and will exist” and “We will not be erased.”

Sophomore  Hannah DePriest said “We are just going against the whole ‘trying to erase transgender out of existence’ that the government is trying to do right now and we’re just trying to show them we’re here to stay.”

DePriest referred to the Trump administrations leaked memo stating a person’s sex would be determined at birth based on their physical biological traits.

After half an hour of chanting outside of the SAC, the rally marched across campus chanting,  “No Trump, No KKK, No fascist USA” and “trans liberation now, no justice, no peace.”

While the rally lasted an hour, many members lingered afterward to offer their love and support for one another.

Jordan Lyons, a theater major, said the crowd was good.  “It was about what was expected, maybe a little bit more,” Lyons said, estimating there were about 200 people there.

“Having big turn-outs like that is really important for rallies and protests,” Lyons said.  “It helps display certain marginalized groups.  This isn’t just some small group of people that can easily be ignored; it’s a large group of people that are part of our community.”

Both Lyons and DePriest said they have not received backlash for this event but have received a lot of support and interest from faculty.

U of L has been previously rated as one of the most LGBT+ friendly campuses in the country.

Mordean Taylor-Archer, Vice Provost for Diversity and International Affairs, sent an email in support of the rally Oct. 31.  “We must speak against policies that seek to repress, exclude and deny the rights of others. These would include the proposed policy that would define gender at birth, acts that separate immigrant children from their parents and the deployment of military to stop immigrants who traveled thousands of miles to seek freedom and opportunities from entering this country,” she wrote. “I encourage all of us to stand collectively and individually for the values that lead us to a more just and inclusive society.”

Throughout the rally, various members came forward to lead chants or  told stories of coming forward. One bystander read a poem they had written in support of the community.

Another member stood on a table announcing their support for each member of the crowd and their journey through their gender identity,  saying “I am so proud of you.”

Another came forward to say they had driven three hours to campus to be part of the rally to fight for trans visibility, to be in a place they felt safe to be who they are. The speaker reminded the crowd they are not their gender identity.