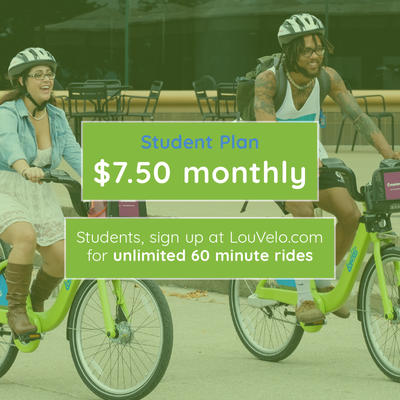 The city of Louisville’s LouVelo bike sharing program is about to expand across Belknap Campus.

Crews are expected to install four new stations March 11-12 at the J.B. Speed School of Engineering, between the SAC and Threlkeld Hall, Freedom Park and at the Floyd Street Parking Garage entrance to the SAC. A station will also be installed at The Bellamy affiliated student housing northwest of campus.

The stations, which can hold a total of 12 bikes each, are in addition to off-campus LouVelo stations installed at other city locations. LouVelo debuted in the city in 2017 and the short-trip bicycles have become popular as quick, thrifty, fun and environmentally responsible ways to get around.

Justin Mog, assistant to the provost for sustainability initiatives, said of the expansion, “We are always thrilled to see more people getting to and around campus on bikes — it means one fewer car we have to park, less traffic, less danger, cleaner air and less carbon emissions, and healthier people using their muscles rather than fossil fuels to get around.”

With the new stations, more than 320 bikes at 37 stations will be available to riders across the cities of Louisville and Jeffersonville, Indiana.

LouVelo’s student pricing plan is $7.50 per month for unlimited, 60-minute rides. Bikes are checked out by membership card or app, and a student plan can be purchased at louvelo.com/additional-price-plans.