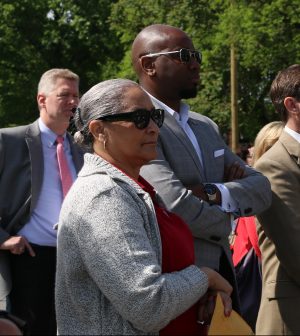 At a recent U of L trustees’ committee meeting, the vice provost for diversity and international affairs described a “major decline of African-American faculty in 2018.”

Between 2013-17, 38 African-American faculty left the university. Mordean Taylor-Archer told the academic and student affairs committee 19 black faculty have left since Jan. 1 (University spokesperson John Karman later corrected Taylor-Archer’s figure to 17.). Of these, most resigned, and 12 were tenure-track.

President Neeli Bendapudi said the administration is waiting for data from human resources and the office of institutional research to inform an action plan. These departments are tracking down the former faculty members to administer surveys about what triggered their departures.

“Sometimes it’s promotions, sometimes it’s dual-careers, so we don’t know. But you will see a report out on that in January,” Bendapudi said.

University spokesperson John Karman said the university conducts a faculty census every year on Nov. 1. Last year’s results showed 117 black faculty members were employed at the university (note: faculty who report more than one option for race/ethnicity are not included in this figure). At the end of September, 14.5 percent had left.

According to the preliminary data, the university employs 1,777 full-time faculty in total. This year, 134 faculty members have left the university, and 13 percent of those are black.

A 2017-18 study by the National Center for Educational Statistics found that the national average percentage of black faculty at post-secondary institutions is 6 percent.

As a result of the departures, U of L’s percentage of black faculty is now just under the national average.

For reference, according to the US Census Bureau, 8.4 percent of Kentuckians, and 22.9 percent of Louisville residents are black.

Department of Pan-African studies chair Ricky Jones said he has long warned administrators that the university was “bleeding” black faculty, but nothing was done.
“I think for awhile there was no acknowledgement at the university that there was actually a problem, so it got worse,” Jones said.

Jones said he was confident in Bendapudi’s stance as a newcomer to tackle the issue, but other administrators have known about it and failed to act until now.

“President Bendapudi, she’ll pay attention to it. But all the people downstream, have been here. Why have they done nothing?” he asked.

From conversations with exiting faculty, the office of diversity and international affairs anecdotally identified the following race-related reasons given for why some left:

Experienced racist or discriminatory behavior and nothing was done, and

Being viewed as not qualified or hired for affirmative action reasons.

Taylor-Archer said the issue of black faculty attrition will be addressed in part with the campus climate action plan. The plan recommends more accountability, a zero-tolerance policy for racist or discriminatory behavior and mandatory university-wide diversity and implicit bias training.

Last year’s campus climate survey results were published in January without an executive summary and no plans for third-party analysis. This data revealed much about faculty’s attitude towards the university’s workplace climate, but did not separate answers by race or ethnicity.

Taylor-Archer said the university is also developing a leadership program for faculty of color to improve retention.