UofL is taking a variety of steps to reduce flooding and divert stormwater from the sewers by promoting infiltration and recharging aquifers.

UofL turns campus into more of a sponge to reduce flooding

Actions taken after 2009 deluge help reduce the damage at UofL

The massive, unprecedented flood which hit UofL on August 4, 2009, causing $21 million in damage to 92 campus buildings, was a wake-up call for many. The 7.2 inches of rain which fell in just 78 minutes hinted at the increasing intensity of storms to come as our greenhouse gas emissions continue to warm the planet and alter the climate we once knew. But it also helped motivate us to take action to both mitigate our climate impact, and to adapt to a changing climate by getting serious about sustainable stormwater management. Further flooding on May 29, 2012 not only validated our concerns, but demonstrated that our work since 2009 to enhance stormwater infiltration has begun to pay off. Read more.

UofL is working with Louisville's Metropolitan Sewer District (MSD) on a variety of "green infrastructure" projects to help keep stormwater runoff out of the combined sewer system. In the past, every raindrop that hit UofL's rooftops (over 2.2 million square feet on Belknap campus alone!) and pavements was channeled into the same sewer system that handles our sewage which truly needs to be treated. But, as our former Vice-President for Business Affairs, Larry Owsley put it, "When you have that much rain in that short a time, the sewers — which are large sewers — just back up and there's no place for the water to go." Even if the sewers can handle stormwater from UofL, the treatment plants at the end of the pipe often cannot, leading to dangerous releases of untreated sewage into the Ohio River - a threat to human health and ecological integrity.

UofL has pursued means of lessening the risk of flood and reducing our campus' contribution to the problem by diverting stormwater from the sewer system all together through infiltration and rainwater harvesting projects, or by slowing its release through water absorbing changes to our campus landscape. Around campus, we have disconnected downspouts, installed vegetated green roofs, and built rain gardens and bioswales to facilitate groundwater recharge through infiltration.

Want to disconnect your downspouts, too? MSD is offering residential customers $100 per downspout! 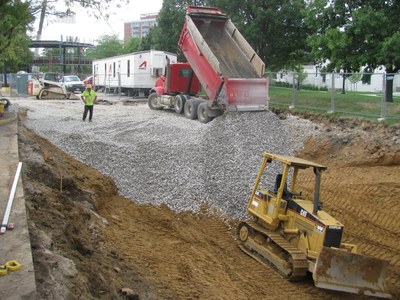 MSD hopes to save money, property by 'greening' University of Louisville 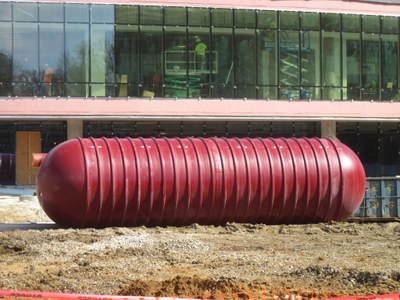 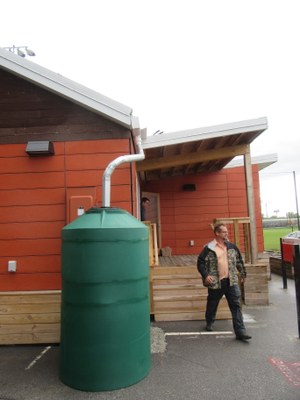 In recent years, UofL made several changes to campus landscaping, parking lots and rooftops, with the help of $1.25 million in cost-sharing from MSD. In 2015, MSD confirmed that UofL's projects are diverting about 72 million gallons of stormwater every year! We think that this significant investment will essentially pay for itself by helping prevent millions of dollars in future flood damage. We are also hoping the projects at UofL will serve as an example for similar projects across the city on both public and private property. MSD's investment in Belknap campus stormwater projects is part of an $850 million agreement that MSD made in federal court with the U.S. Environmental Protection Agency and state regulators in 2005 to reduce the incidence of combined sewer overflows into waterways during storm events.

Projects at UofL include: 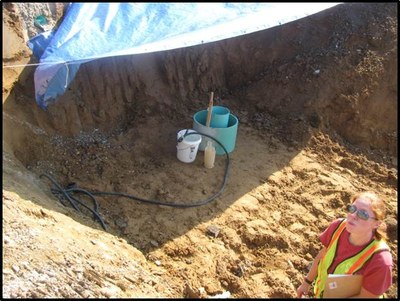 Researchers from UofL's Center for Infrastructure Research have installed monitoring equipment to study infiltration rates, storage capacity, and the performance of these designs.

In 2014, UofL joined the Universities Council of Water Resources, an association of institutions and individuals representing various fields of natural and social sciences who are at the forefront of education, research, and public service around water resources. Membership provides reduced registration fees to UCOWR conferences for all UofL employees and students, as well as electronic subscriptions to the Journal of Contemporary Water Research and Education, participation in UCOWR governance, networking with other water scholars, and increased visibility as among the leading universities in water-related research across disciplines. Law Professor Tony Arnold (502-852-6388) serves as UofL's lead delegate to UCOWR.