For the sixth consecutive year, the Arbor Day Foundation has named the University of Louisville a Tree Campus USA, a status awarded to colleges and universities that invest in and practice good management of their campus trees. 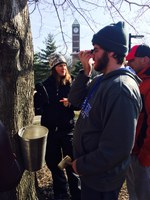 by Janet Cappiello, communications and marketing & Justin Mog, Office of the Provost

The city of Louisville has been identified in studies as being one of the most extreme “urban heat islands” in the U.S. – meaning that temperatures in built-up areas are significantly higher than in the surrounding countryside. Loss of tree canopy is one of the main drivers for this problem in Louisville, so protecting and expanding our campus tree population is vital for mitigating the heat island effect.

In spring 2016, UofL is focusing its tree planting efforts on tackling this problem by planting 59 new shade trees in and around parking lots that would otherwise absorb more heat.

The Tree Campus USA award is based on care and maintenance of trees, as well as efforts to meet targets such as UofL’s goal of no net loss of tree biomass on campus.  The university first developed a care plan in 2010 for the more than 2,500 trees on its 309-acre Belknap Campus.

“It’s a team effort annually for our campus to achieve such a designation,” said Greg Schetler, Belknap Campus grounds superintendent, who is responsible for day-to-day management of UofL’s urban tree canopy. “We go to great lengths to make sure that we plant trees the best possible way we can. We really take pride in planting these trees. What sets us apart is we really focus on putting the right plant in the right place.”

The Belknap Campus is home to more than 2,500 total trees representing more than 130 species, including many that are native to our region. Among them are dogwoods, tulip poplars (the Kentucky state tree), oaks, persimmons, magnolias and elms, including a rare American Elm, a species devastated by Dutch Elm disease in the last century.

For the first time, this spring Biology lab students have been using campus trees as a living laboratory by tapping sap from maples to make syrup that will be sampled for the campus community during a pancake party on April 15th at which the student researchers will share their results.

The university has created a Tree Tour to help Belknap campus visitors, students, faculty, and staff learn about the many trees on interest on campus.

For more information, contact Justin Mog, assistant to the provost for sustainability initiatives, and Chair of the Campus Tree Advisory Committee, 502-852-8575.