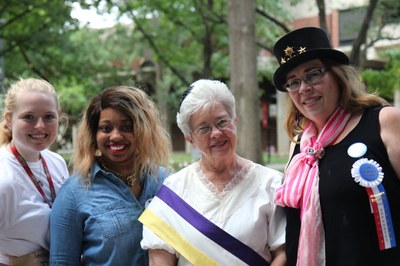 August 26th is the Anniversary of Women Winning the Vote! Are you ready to celebrate? Join the UofL Women’s Center in the celebration! Women’s Equality Day is celebrated in the U.S. on August 26 in recognition of women winning the right to vote. In addition the Voting Rights Act of 1965 will be celebrated.

There will be voter registration, informational booths and refreshments in the Red Barn. Come out and learn more about Women’s Equality Day!

***Masks required while in the Red Barn. per the University's requirement for masks in public, indoor spaces for all university and community members.

Commemorate Women's Equality Day by going on a Virtual Scavenger Hunt with us! When you have completed the scavenger hunt, email it to womenctr@louisville.edu by Friday August 27th by 5pm. The first 20 who send in their completed form will win a prize. Stop by our Women’s Equality Day event on August 31st to receive your prize. *Prizes are for UofL students, faculty & staff, but we encourage the community to participate too!

Optional, but encouraged: Share your finds on social media and tag us so we can celebrate these women and acknowledge their fight for the right to vote! We will be sharing your photos on our Instagram and Facebook.

People often forget that women could not vote throughout the U.S. until 1920. This August 26th is the 100th anniversary of women winning the right to vote through passage of the 19th Amendment to the Constitution. The 55th anniversary of the Voting Rights Act was also celebrated this year.

Both women and men owe a great deal to the brave suffragists who persevered over seventy years until they succeeded. They were led by outstanding American patriots like Elizabeth Cady Stanton, Lucy Stone, Susan B. Anthony, Ida B. Wells, Carrie Chapman Catt, Alice Paul, and many others. We remember them all - speakers, field workers, political organizers, strategists, demonstrators, and prisoners - and honor their love of democracy on Equality Day, August 26.
This 95th anniversary also marks the start of the drive to recognize the final five years of this great civil rights movement, leading up to its centennial in 2020. New efforts like the campaign to put a woman on the $20 bill and placing statues of suffragists in New York and Tennessee show that exciting activities have already begun.
Since women in every state were involved, it can be very rewarding to learn about that part of local history.
This year, celebrate women's vital victory for democracy.

Remember, women won their political independence with the help of supportive men and their success made the U.S. a more complete democracy. Like the Fourth of July, Women's Equality Day is a day for all of us to celebrate.