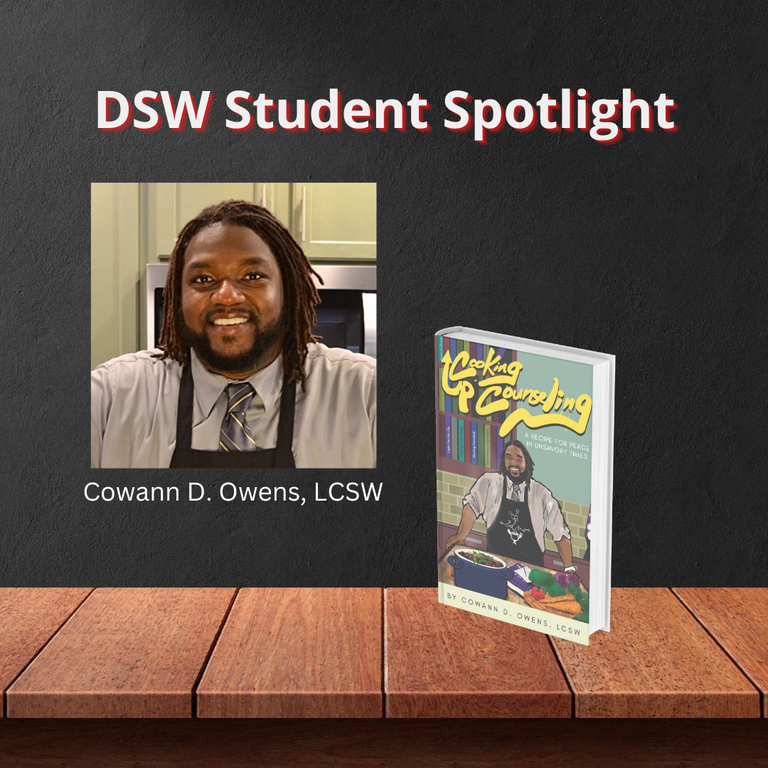 DSW Student, Cowann (pronounced "Co-Juan") D. Owens, is a licensed clinical social worker with 14 years of social work experience. He is currently employed at the Department of Veterans Affairs where he provides mental health treatment to veterans. Cowann began his career as a Child Protective Services worker in 2008 and branched into a clinical role as a therapist in 2013. In the past, he has served as a child and family therapist in community mental health settings, a middle school counselor, a private practice therapist, and a clinical and administrative supervisor.

Recently Cowann published his book, "Cooking Up Counseling: A Recipe for Peace in Unsavory Times," which provides a step-by-step understanding of counseling, how to access services, and what to expect throughout the process. The purpose of "Cooking Up Counseling" is to use fun and relatable cooking metaphors to demystify the therapy process, debunk stigmas, and encourage all people–especially the most resistant populations–to prioritize self-care by investing in mental health treatment. The book is available at Amazon.

Cowann was born in Louisville, Kentucky, where he resides with his wife and two children. His hobbies include playing video games, weight lifting, "burning" meat on the grill, and hanging out with his family. He considers himself an athlete, having played football in high school (2000 Kentucky State champions - Go, Louisville Male!), collegiate and Semi-Pro levels, and wrestling professionally as "Big Zo'' since 2014.

His top five values are: Faith, Family, Happiness, Making a Difference, and Health.

Cowann believes that if you have a dream, you're never too old to accomplish it unless you are dead. Live while you're alive! You're only guaranteed one shot at life, so make the most of it!