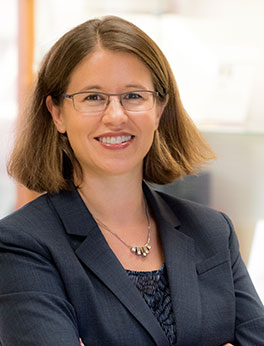 Professor Jamie Abrams is eager to get back in the classroom at the Brandeis School of Law this fall.

Abrams, who spent the 2017-18 academic year as a visiting professor at Georgetown University Law Center, will bring some new curriculum to her family law course at Brandeis Law.

Abrams has found herself focusing on the question of “What does it mean to teach family law after Obergefell?” She is referring to the landmark 2015 U.S. Supreme Court marriage equality decision — a case that had its origin in a circuit court split initiated by appeals to cases within the U.S. Court of Appeals for the Sixth Circuit, including Kentucky. The Sixth Circuit upheld the same-sex marriage ban while other circuits had rejected such bans, taking the case to the Supreme Court.

“Since the start of my career, I have been spending much of my time as a family law scholar keeping up with current events, as same-sex marriage litigation evolved across the country,” she says. “For many years, I was bringing in guest speakers who litigated those cases. Because some of the cases began in Kentucky, this allowed me to draw upon a rich local resource who helped students see how the law was developing and changing as the movement progressed.

“However, because I was spending so much time trying to help students understand the rapid changes in the spousal relationship part of family law as it literally changed before our eyes, we didn’t have as much time to talk about other equally interesting and important legal questions, notably parent-child issues, and especially abuse and neglect and parentage issues,” she says.

At Georgetown, Abrams began to focus more of her teaching on these parent-child issues, which she sees as the area of family law likely to witness the next set of major developments. Her family law course there was titled Parent, Child, and the State.

She sums up some of the legal challenges ahead as follows: “How do we determine who is a legal parent? So much of how we determine parentage historically has been hinged on gender norms,” she explains, adding that “now, even biological parentage alone might not be an accurate marker of parentage, given reproductive technologies and the choices people make through practices like surrogacy and also through adoption.

“What my students will experience when they take Family Law with me this year is a course that really pushes us to consider this next phase of family law reform, which will have to address issues of parentage in a modern context,” Abrams says.

“Each state now gradually has to revisit its construction of parentage laws entirely. I think it will be an exciting and timely next-wave reform for our students at Louisville to study more closely. They can become actors in the reforms that Kentucky will need to make in the years to come to comply with prevailing law.”