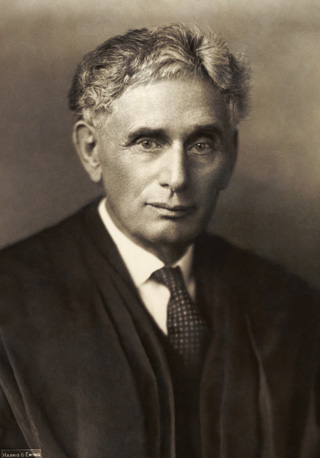 Louis Dembitz Brandeis was born on November 13, 1856, in Louisville, Kentucky.  After graduating from Louisville's Male High School and studying three terms at the Annen-Realschule in Dresden, Germany, he was drawn to the study of law by his uncle, Lewis Dembitz — a noted practitioner, public citizen and scholar who eventually published the landmark treatise, Kentucky Jurisprudence, in 1890.

Following graduation with the highest honors, he worked briefly at a St. Louis law firm, then returned to Boston where he established a partnership with Samuel Warren; together, they combined the practice of law with a love of developing the law, as evidenced by their landmark article, "The Right to Privacy."

In 1916, at the age of 60, Brandeis became an Associate Justice of the United States Supreme Court, where he served until 1939. He passed away in 1941.
Justice Brandeis’ legacy includes a strong devotion to public service, an interdisciplinary approach to law and a commitment to liberty. He proclaimed that individuals could only grow to their full potential only when nurtured by freedom.

“Those who won our independence believed that the final end of the State was to make men free to develop their faculties; and that in its government the deliberative forces should prevail over the arbitrary. They valued liberty both as an end and as a means. They believed liberty to be the secret of happiness and courage to be the secret of liberty.”

Justice Brandeis devoted the equivalent of at least one hour a day to public service. He also believed that law schools should cultivate an appreciation of service as a professional obligation and outlined this approach in his address, “The Opportunity of Law,” delivered to the Harvard Ethical Society in 1905. In it, he said the “whole training” in law school should include not only the development of reason and judgment, but also the inculcation of a commitment to the legal profession’s public trust.

He lamented that many lawyers had neglected this trust, representing the nation's moneyed interests "while the public is often inadequately represented or wholly unrepresented." Those words remain timely; today, the law school named for Justice Brandeis features one of the country's first five mandatory public service programs.

Brandeis didn’t just preach these words, he lived them: In the two decades before he went onto the bench he earned the title of "the people's lawyer." It was during this time when that he pioneered the "Brandeis Brief," using social and economic data to justify the legislatures' efforts to improve the worst aspects of industrialization. He struck many people as strange when he refused to accept fees for his public work, but many trace the beginning of pro bono work in this country to his efforts in the years before World War I.

Drawing upon his experience as a practitioner and recognizing that law is shaped significantly by societal forces, Justice Brandeis believed a lawyer's education must extend beyond the discipline of law itself and is credited for creating the first brief that pulled from disciplines outside of the legal realm. His 1907 Brandeis Brief included legal citations as well as social research and data and was decisive in the Muller v. Oregon Supreme Court case. This marked the first time scientific research was included alongside law tenets in a Supreme Court case.

The Brandeis Brief has since been used in numerous landmark cases, including Brown v. Board of Education. The NAACP used Justice Brandeis’ social science methods in the school desegregation cases leading up to and including Brown, arguing that there are psychological damages to black children excluded from white schools.

To Brandeis, this crossing of disciplinary boundaries was not an intellectual affectation; it was a fulfillment of the lawyer's duty to master the facts.

Other areas of focus

While Justice Brandeis is best known for his commitment to public service and interdisciplinary approach to law, he also championed a number of other causes, all of which are embraced by the school that bears his name.

Although he never returned to live in Louisville, family members and their descendants remained in Louisville, and he continued to be connected to his family, to Louisville, to the University of Louisville and to the Law School.