Robert Brown ('74) honored by Japanese government for lifetime of achievements 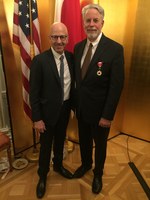 To say that Robert L. Brown has led a remarkable life would be an understatement.

The 1974 graduate of the Brandeis School of Law has practiced law in Japan, has earned several advanced degrees, has passed the CPA exam, has served as a business school dean, has written more than 20 books and is the incoming chair of the American Bar Association's Section of International Law.

On Jan. 19, 2018, he added another accomplishment to his resume: he was awarded the Order of the Rising Sun, Gold Rays with Rosette. This honor is presented by the Japanese government in recognition of an individual's "outstanding contributions to friendship between Japan and the United States of America," reads the congratulatory letter sent to Brown from the Consulate-General of Japan.

“This is Japan’s highest award to a non-Japanese, and it is a great testament to Robert’s lifetime of work in service of a stronger US-Japan relationship,” says Brandeis Law Dean Colin Crawford.

Brown's ties with Japan are far-reaching.

"I love to do forecasting and economic modeling. Back in the '70s, I thought it was the next great economy," he says of the country.

For 14 years, he worked in the New York and Tokyo offices of Mitsui & Co., a global trading company. It was during his time at Mitsui that he learned to read and speak Japanese. Brown later joined law firm Pillsbury Madison & Sutro (now Pillsbury Winthrop Shaw Pittman) and served as managing partner of its Tokyo office.

During his time in Tokyo, Brown earned a master's degree in business from Jochi University.

Brown also holds a bachelor's degree in international studies from the University of Louisville and earned a master's in community development and an MBA while completing his law degree.

He has a Ph.D. in Japanese Privatization from Cambridge University and a Ph.D. in Indonesia Legal Reform and Creditor Relations from the London School of Economics and Political Science.

"I knew when I was 8 years old that I wanted to go to law school. I knew from high school that I wanted to do international law," Brown says. "I recognized that the University of Louisville would be a great launching pad for me."

Brown's international experiences have shown him new perspectives, he says.

Once, he visited a lumber yard in Japan and noticed that wood was stacked vertically, rather than horizontally, in order to save space.

"There's other ways of doing things," he says. "That's what I love about international law — I get to experience new things and I learn more about myself."

Brown, who missed his law school graduation ceremony because he was driving to a new job in New York, encourages today's law students to take advantage of leadership opportunities such as serving on committees. Doing so is a great way to make connections and meet people from different backgrounds, he says.

As the incoming chair of the ABA's Section of International Law — which has about 25,000 members — Brown is looking to focus on programming, policy and publications during his tenure. Law students make up about 40 percent of the section's membership, and he encourages more to become involved.

"They are the hottest commodity. We're looking to the future," he says.

Brown, who now practices with Louisville firm Lynch, Cox, Gilman & Goodman PSC, says he is motivated by the Japanese word "kaizen," which means continuous improvement. He is also driven by fun.