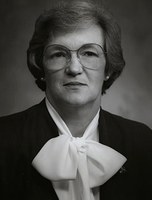 It is with sadness and gratitude for a life well lived that the Brandeis School of Law announces the death of Dean Barbara Buchanan Lewis on Nov. 7, 2017. She was 79 years old.

Lewis was the first female law dean at the University of Louisville, serving in that position from 1982-1990. After she left the dean's office, she returned to the faculty, where she mostly taught tax law, until her retirement in 2006. Even after retirement, she continued on as an adjunct professor until 2014.

Linda Ewald, a retired professor at the Brandeis School of Law and an associate dean under Lewis, provides information about Lewis' life and career:

Lewis earned bachelor's and JD degrees from the University of Louisville, a master's in education from Tennessee Technological University and a Master of Law and Taxation from the Marshall Wythe School of Law at the College of William and Mary.

Before her career in legal education, Lewis worked as an attorney for the U.S. Corps of Engineers, as a probation officer for the Jefferson County Juvenile Court and as a teacher in Honduras and Guatemala.

Her true passion was the law and education, and following her graduation from William and Mary, she taught at Cumberland School of Law and the University of Oklahoma College of Law, where she also served as chair of the faculty senate and as interim dean.

Born in Campbellsville, Kentucky, Lewis returned to her Kentucky roots in 1982 when she and her husband, Jim, came to Louisville, where she became dean of the Brandeis School of Law.

Lewis was a trailblazer in legal education. She was one of only a handful of women students in her law school class and at the time she was named dean at UofL there were only five other women law deans nationwide. During her tenure as dean, she built bridges within the community and the profession and served on a number of boards, including the Center for Women and Families, the Department of Public Advocacy, the Louisville and Kentucky Bar Foundations, the League of Women Voters, the ACLU and Citizens for Better Judges.

As dean, and later as a professor, she worked tirelessly to promote diversity in the law school and the profession. She served on many national boards, including the Council on Legal Education Opportunity, the American Bar Association’s Commission on Women in the Profession and the Law School Admissions Council Task Force on Minority Recruitment, as well as numerous local and state-wide initiatives relating to access and diversity in the legal profession.

While Lewis enjoyed the challenges of the deanship, she missed daily contact with students. In 1990 she returned to pursue her passion, classroom teaching.

Mostly, she taught tax. When asked why anyone would teach tax, she would respond with, “I just love the Internal Revenue Code.”

As a professor, she was tough, demanding and had no patience with slackers. She felt strongly about the importance of attendance, preparedness and promptness. She was a stickler for all three. Lewis expected students to be respectful, responsible, collegial and professional. Students who complained about the difficulty of the tax code or the length of an assignment generally got the same response from her: “Life is tough.” On occasion, she was known to make the same observation in faculty meetings.

Despite the heavy demands Lewis placed on students, and the fact that some students found her a bit intimidating, she cared deeply about them personally and about their professional success.

She taught them tax but, more importantly, she taught them about the values of the legal profession and what it means to be a professional. She was a mentor and role model to generations of students.

When she announced her retirement in 2006, the Student Bar Association created a special teaching award in her honor and recognized her at graduation. Throughout her career she received many awards for her leadership and community service, but the awards she received from the University of Oklahoma and the University of Louisville for excellence in teaching were the ones she valued most.

Barbara Lewis loved the law and she was devoted to her students. Several years ago, upon receiving a Kentucky Bar Association Award, she said, “I have always thought that to be a lawyer is a great calling. It is a great service, and to teach lawyers is great privilege.”

She embraced the calling, served the community and profession with distinction and taught her heart out every single day.  A life well lived. She will be missed.

Brandeis School of Law Professor Laura Rothstein, who served as the law school's second female dean (2000-2005), shares this letter she wrote to Lewis in 2007:

How lucky I am to follow in your shoes. You been a great role model and mentor at this very special law school. I thank you for breaking the glass ceiling for me.

I’ve always enjoyed your dry humor, your impatience with baseball caps in the classroom, and your stories about the various characters in our law school’s history.

You have led by example, and we are all very fortunate that you returned to your alma mater to serve it as dean. I remember well how you said you would not give me any unrequested advice — the only exception you made to that statement was that we needed to get the staff a better place to relax. So I set about finding a room that could serve as a staff lounge.

Although you don’t draw attention to all your good works, I am very aware of what you did to change the culture of the faculty, how you raised funds to create professorships to recognize outstanding faculty members. And we are all aware of how much your students respect and appreciate your dedication to teaching and your knowledge and understanding. And you continue to serve the law school and are even willing to try new courses.

You have done all this quietly, without fanfare. It has not gone unappreciated. Thank you for all you have done for the law school and for me.

Don Burnett, who was dean of the Brandeis School of Law from 1990-200, shared this reflection of Lewis:

Dean Lewis (it took a while for me to call her Barbara, although she welcomed it, and always used it when signing notes to me) was a pioneer. When she became the law dean at the University of Louisville, only a handful of America’s law schools, which totaled approximately 170 at the time, had women in the dean’s office. The times were not easy.  Barbara once commented — as a matter of fact, not ruefully — that women in academic leadership had to prove themselves ceaselessly, while men enjoyed a presumption of competence that endured until disproven.

She did prove herself abundantly, of course. She managed the budget adroitly, moved the law school into the brave new world of private giving, established faculty fellowships and — especially — left the law school much stronger than she found it in terms of the diversity of its faculty, staff and students.

Barbara was a consummate colleague. She offered me advice sparingly, but always when needed and unfailingly in a gracious tone. She invariably spoke well of others, even when disagreeing with them, and whether they were present or not. I distinctly remember once talking to her after a faculty meeting in which a divisive issue had been discussed, and I wondered out loud whether some of our colleagues had spoken from a standpoint of self-interest rather than institutional interest. “Surely not,” she replied, cutting me short. Then she looked at me gently and repeated for emphasis, “Surely not.”

In her post-decanal days, she clearly enjoyed the return to full-time teaching. The teaching evaluations by her students showed that the feeling was mutual. The students praised her expertise, her obvious caring about each of them and her ability to “make tax law interesting.” She had a self-deprecating sense of humor and a surprisingly distinctive laugh that contrasted with the stern countenance she could summon when needed. In her teaching, though, it was seldom needed. Indeed, from time to time, as I walked past an open classroom door, I could hear Barbara and her students laughing together.

Today, having heard of Barbara’s passing, I think about a life’s work devoted to the joy of teaching and learning. The laughter through the open doorway still echoes in my mind. Will it ever stop? Surely not.

At a Dec. 15, 2017, faculty meeting, the faculty of the Brandeis School of Law passed a resolution expressing "its respect and profound affection for Dean Lewis" and requesting "that this resolution be conveyed to her family."