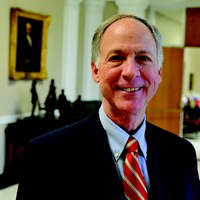 Professor Les Abramson, a nationally known expert in judicial ethics, is featured in the final issue of the Valparaiso University Law Review.

In October 2018, Valparaiso University Law announced it would be closing, leading to the law review's planning of its final issue: a Tribute Issue featuring reprints of several of its most popular articles.

Abramson's article, Deciding Recusal Motions: Who Judges the Judges?, was published in the law review in 1994 and remains its most-downloaded article with more than 42,000 downloads since 2011.

"Abramson's work surveyed the existing practices in American courts and proposed a system for recusal review. It was not only timely but also timeless, as it continues to be referenced in scholarly and litigation works alike," writes Valparaiso Law Dean David R. Cleveland in his introduction of the reprint.