President George H.W. Bush and his legacy of the Americans with Disabilities Act

Professor Laura Rothstein is a Distinguished University Scholar and an expert in disability law. She wrote this reflection about President George H.W. Bush's legacy and his enactment of the Americans with Disabilities Act. 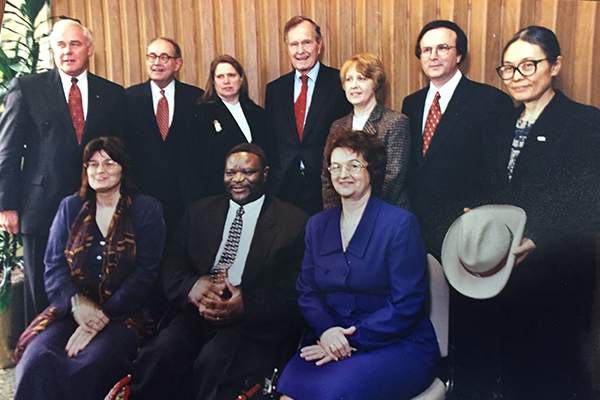 Professor Laura Rothstein is to the right of President George H.W. Bush. In this 2000 photo, they’re celebrating the 10th anniversary of the ADA.

With the passing of President George H.W. Bush, much has been reported about his legacy. Certainly his achievements in the international sphere are significant, as are his many personal attributes of decency, civility, kindness, humility and commitment to service to country. Particularly noteworthy is one of the domestic accomplishments — the enactment of the Americans with Disabilities Act, signed by President Bush in 1990 at a highly publicized event on the White House Lawn. At a celebration to mark the 10th anniversary of the ADA in 2000, President Bush said that enacting the ADA was his greatest achievement.

The passage of the most significant civil rights law since the 1960s required the energy, attention, commitment and hard work of a great many individuals and the bipartisan support that would be unlikely today. It is extremely unlikely, however, that the ADA would have passed were it not for the strong commitment and leadership of President Bush from the outset. The story of the ADA is told in detail by Lennard Davis in Enabling Acts: The Hidden Story of How the ADA Gave the Largest US Minority Its Rights (2015).

The initial concept of the ADA was developed by advocates during the Reagan administration and resulted in a detailed report of the concept. The Challenger explosion the same day that the report was released resulted in the cancellation of the meeting scheduled with President Reagan for the next day. Instead, Vice President Bush replaced him at that meeting. This twist of fate turned out to be fortuitous because Bush had a number of family experiences with disability and he became a strong advocate of the legislation and eventually was the president to sign it into law.

It has been suggested that his commitment to disability rights was a critical factor in his election to be president. Just as it is hard to second guess close votes in any presidential election, while it is not certain, Enabling Act suggests that the disability vote may have been a critical difference in the election of Bush.

Disability issues were highlighted in his first address to Congress in February 1989, couched in a focus on economics (not charity), when he said “To those 37 million of Americans with some form of disability, you belong in the economic mainstream.  We need your talents in America’s workforce. Disabled Americans must become full partners in America’s opportunity society.”

One of the most poignant images during this week is that of President Bush’s service dog, Sully, near his casket, highlighting that Bush himself benefited from the accommodations made possible for others because of the ADA, whose value and benefits he understood almost three decades ago.