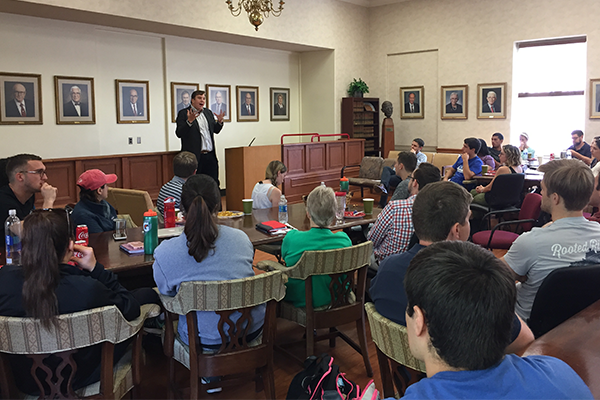 Stephen Vladeck, A. Dalton Cross Professor in Law at the University of Texas at Austin School of Law, brought his national security expertise to Louisville for a special presentation on October 9, 2018.

Vladeck, a nationally recognized expert on the role of the federal courts in the war on terrorism, has appeared in a variety of legal publications, including the Harvard Law Review and the Yale Law Journal. He is also CNN's Supreme Court analyst, a co-author of Aspen Publishers' national security law and counterterrorism law casebooks and co-hosts the National Security Law Podcast.

He came to Louisville Law thanks to the Dean's Mentoring Grant and as part of the 2018-19 Faculty Speaker Series.

Vladeck is serving as a mentor to Professor Justin Walker. The mentoring grant provides junior and recently tenured faculty with an opportunity to get focused attention from a national expert on a piece of scholarship they are working on.

"Steve Vladeck’s visit shows what a great idea the Dean’s Mentoring Grant is," says Walker. "The students, faculty and I learned a lot from Steve’s extremely engaging talk. The room was riveted! Plus, Steve shared some great advice with me about several of my future articles. And since I think he enjoyed his time at our school, I think he will be a great ambassador for the University of Louisville."

Vladeck discussed his research on the rights and rules of national security.