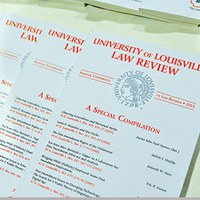 With these scores, the Louisville Law Review has obtained its highest position ever and now has the distinction of having the top law review in Kentucky as it pertains to the categories of cites per cost and citations from journal articles.

Implementing a ‘culture of success’

Editor-in-Chief Daniel Reed attributes the rise in rankings to a “cumulative effect of content published over an 8-year period.”

“Before their tenures, the Law Review was in pretty bad shape. Several specifics come to mind to help turn things around. The number of issues published per year was cut from 4 to 3. However, the amount of content stayed the same. This allowed for a decrease in our printing costs. This coupled with a more targeted approach to the budget allowed the law review to become financially self-sustaining, creating more flexibility for the organization,” Reed said.

Additionally, editing efficiency became more of a priority. For example, the Law Review's Editing Submission Sheet (ESS), a standardized editing form, was created by a past Editorial Board, resulting in the Law Review being recognized for best practices and innovation in editing at the 2013 NCLR.

The Law Review also began taking a more targeted approach to article selection, Reed said, calling this one of the most important changes that allowed for an increase in rankings.

“The creation of an Article Selection Editor position on the board allowed for a person to be committed entirely to finding quality content. Second, the law review began to focus on factors likely to reflect in the rankings, including the author's credentials and past publication and citation history. Overall, the process was revamped to ensure that the law review was receiving content of the highest quality from well cited authors,” he said.

Finally, Reed notes that the Law Review used to publish pieces from the Annual Warns-Render Institute, but it fell out of publication at one point. It was reinstated in Volume 50 and has since been one of the most well-cited issues each year.

“Aside from the practical changes, I think these past boards have implemented a culture of success for our organization. By creating conditions that allow the Law Review to thrive, members can be proud of what we are able to accomplish,” Reed said. “Students, faculty, and alumni have a greater respect for law review than ever before. This helps us not only to continually attain top students but it makes our members more willing to put forth a dedicated effort in the interest of furthering the Law Review's mission of impactful scholarship.”

It’s been a banner year for the Louisville Law Review and its members. Louisville played host to the 61st annual National Conference of Law Reviews in March. This marked the first time UofL hosted the event since 1986.

The University of Louisville Law Review also began putting more focus on its digital presence. Reed and Andrew Weeks, online content editor, are on a mission to step up the Law Review’s online presence with more activity on its website, as well as through its Facebook, Twitter and LinkedIn channels. The objective is to keep up with the times and to gain more exposure using tips learned at the NCLR event.

Here is a look at the Louisville Law Review’s overall rankings among ranked U.S. journals from 2004-2014, including its scores from this year.