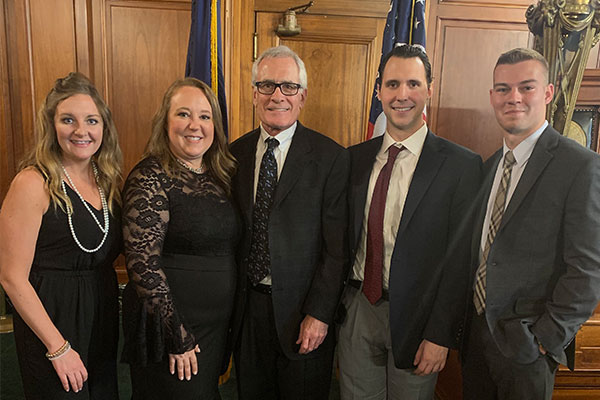 On March 27, 2019, Kentucky Gov. Matt Bevin appointed the Honorable David Cowan Buckingham to the Kentucky Supreme Court. He was sworn in on April 8, 2019.

Judge Buckingham is a 1977 graduate of the University of Louisville School of Law.

He began his 29-year judicial career in 1982 as a district judge for the 42nd Judicial District. Following that role, Judge Buckingham served as a circuit judge for the 42nd Judicial Circuit from 1987-1996. Judge Buckingham served from 1997-2005 as a Kentucky Court of Appeals judge and as the senior judge in Kentucky’s Court of Appeals from 2006-2010.

After serving as an appellate judge for 14 years, Judge Buckingham retired in 2011 and returned to private practice. For eight years, Judge Buckingham has served as counsel for both the Adams Law Firm and the Murray Independent School District. He has also occasionally assisted and consulted with other attorneys in appeals cases and litigation.

It was during this time that a current Louisville Law student, Craig Lamb, became acquainted with the judge. Lamb served as Adams Law Firm's clerk from 2013-2018 and speaks highly of his experiences working for the judge.

"I consider Judge Buckingham to be a mentor who has had a significant impact on my life to date and who contributed in a large part to my decision to pursue legal education at Louisville," says Lamb, a first-year law student. "Judge Buckingham is an extremely noble man, and I believe that compels others to follow his footsteps. He is thoughtful, articulate and thorough — all qualities that will make him a great Kentucky Supreme Court Justice."