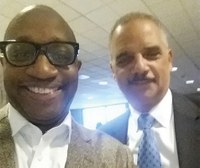 The MLK50 Symposium, hosted by the University of Memphis Cecil C. Humphreys School of Law and the National Civil Rights Museum on April 2, 2018, brought together scholars and civil rights activists "to present on the state of civil and human rights issues as well as racial and economic equity fifty years after Dr. Martin Luther King, Jr.'s death," according to the event's website.

Powell, who attended as an invited traveling scholar, says the event was engaging and was a valuable chance to hear from scholars and progressives on the topics of civil rights and racial equality.

Of special interest to him was the keynote address from former U.S. Attorney General Eric Holder. Powell also enjoyed hearing from Sherrilyn Ifill, president and director-counsel of the NAACP Legal Defense and Educational Fund, Inc. She spoke about recent attempts to infringe on voting rights and the importance of grassroots involvement in combatting those efforts.

Powell says the symposium will inform his thinking on an article he is writing connecting James Forman Jr.'s book Locking Up Our Own and Paul Butler's book Chokehold. Both books were the topics of recent discussions at the Brandeis School of Law, with the scholars presenting their works at events in March and April 2018.

Powell's scholarship focuses on affirmative action and Critical Race Theory, the First Amendment and hate speech, and the Fourteenth Amendment and structural inequality.