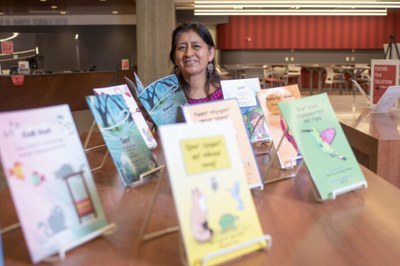 A series of Chatino-language books created by Dr. Hilaria Cruz, Assistant Professor of Comparative Humanities, and her linguistics students are now on display in the lobby of Ekstrom Library, in honor of United Nations International Mother Language Day (February 21).

Chatino predates the arrival of Spanish in the Americas. Cruz said there are up to 50,000 people for whom Chatino is their mother language. The books give families the opportunity to read bedtime stories to children, helping pass the language from one generation to another, she said.

“Books enhance self-esteem, promote intellectual growth, build speakers’ reading levels, and elevate the status of endangered languages in the eyes of the dominant cultures within which they exist,” Cruz said. “An endangered language presented within published books adds an additional dimension in which that language can exist, be promoted and shared beyond oral tradition.”

The six books, all professionally illustrated by artists from around the world, may be the highest quality children’s books published in the language, she said. Cruz had to invent an alphabet for them, doing so in collaboration with her sister, linguistic anthropologist Emiliana Cruz, PhD, and her advisor, Anthony Woodbury, PhD, professor of linguistics at the University of Texas and president of the Linguistics Society of the Americas.

The books are not copyrighted and are licensed through Creative Commons, meaning anyone can download and use them without permission or cost. They can be easily found via ThinkIR (University of Louisville’s Institutional Repository) at Ekstrom Library.

A UofL News story that features more details about this project can be found here.