Jackie Murray, “War, Racecraft and the Heroic Body in Greek and Roman Epic” 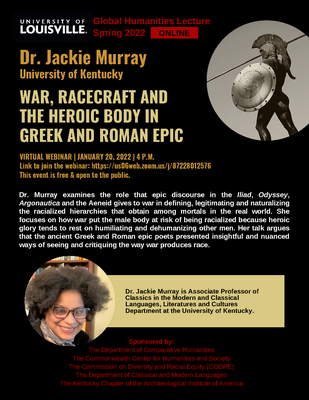 Dr. Jackie Murray is Associate Professor of Classics in the Modern and Classical Languages, Literatures and Cultures Department at the University of Kentucky. Dr. Murray examined the role that epic discourse in the Iliad, Odyssey, Argonautica, and the Aeneid gives to war in defining, legitimating and naturalizing the racialized hierarchies that obtain among mortals in the real world. She focused on how war put the male body at risk of being racialized because heroic glory tends to rest on humiliating and dehumanizing other men. Her talk argued that the ancient Greek and Roman epic poets presented insightful and nuanced ways of seeing and critiquing the way war produces race.

To view a recording of Dr. Jackie Murray's talk for the 2022 Global Humanities Lecture, visit: https://www.youtube.com/watch?v=vTnIraLRubw.