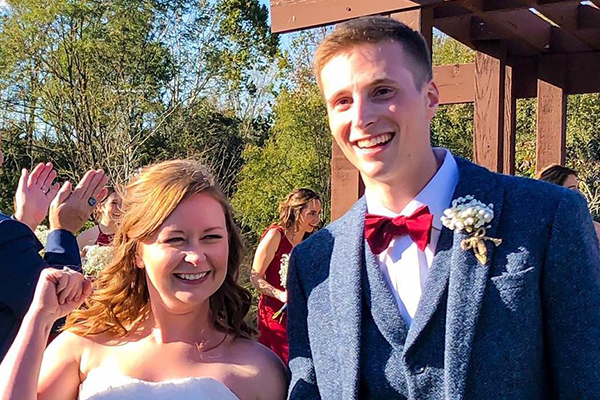 After meeting in their first-year Basic Legal Skills course in 2013, University of Louisville alumni Carolyn Purcell and Liam Michener fell in love. Their relationship grew during law school, and they were married October 20, 2018.

Their ceremony had a special connection to Louisville Law — it was officiated by Professor JoAnne Sweeny, in whose class the couple had first met.

Below, Purcell, now an attorney at Stites & Harbison, shares her reflections about what Louisville Law has meant to her and Michener, now a closing attorney at Mattingly Ford Title Services.

How did you meet?
We met in Professor Sweeny's class (formerly called Basic Legal Skills; now called Lawyering Skills). While we had all of the same classes together, Professor Sweeny's class was small and we were able to really get to know each other as a result. I remember that after we turned in the 1L brief, Liam and I had one of our first real conversations bonding over that shared misery!

What are some of your favorite memories of your time together at Louisville Law?
We had a lot of great times. We had one of our first conversations at Barrister's Ball 1L year. We had a blast every year at Decedent's. And we studied together constantly.

In fact, Liam and I studied for the bar exam together in the law library at Louisville Law. Every day, we would stop at Quill's for coffee, walk over to the law library together, close ourselves up in a study room and stay there until dinner time. While studying for the bar exam can be entirely unpleasant, those days were some of my favorite because of the company.

What prompted you to ask Professor Sweeny to officiate your wedding and what was that experience like?
We asked Professor Sweeny to be our officiant because 1) We found each other because of her class and 2) She has always been one of our favorite professors. Professor Sweeny is rad. I got to be Professor Sweeny's research assistant in my 2L and 3L years, and so we stayed in touch after 1L year. I always felt comfortable plopping down in her office to get advice, complain or just chit-chat. So when we were thinking of who could marry us, the choice was an easy one.