The University of Louisville, in conjunction with Diversity Recruitment of the Office of Admissions, and the LGBT Center, will host Cardinal OUTlook Day on Saturday, April 25. This event is geared towards all high school students who either identify as LGBTQ or are allies of the LBGTQ community. Join us to become more acquainted with UofL's campus, and learn more about UofL's LGBTQ services on campus: Register here.

Brian Buford, Assistant Provost for Diversity and LGBT Center Director, shares about the growth of the LGBT Center and community at UofL:

Ever since the University of Louisville’s LGBT Center opened in 2007 and I came on board as its director, I’ve made it a little game to see how many ways I can come up with that UofL has been the first to do something, and I gotta tell you…my list is getting long! We were the first school in Kentucky to open a LGBT Center, thanks to the hard work of some student activists and the administrative support we had from our President, Provost, and the chief diversity officer. Around the same time, we were the first school in the country (like the whole United States!) to endow a faculty chair in LGBT studies and soon started offering the state’s first LGBT minor.

The list goes on and on: first public school in the South to get a perfect five-star rating on the Campus Pride LGBT Campus Climate Index, first LGBT-themed housing community, first LGBT study abroad program. I tell you, it’s obvious to me that UofL is the best school around for anyone who wants to promote an inclusive, welcoming climate for LGBT people. Whether you’re part of the queer community or not, a school that supports LGBT people is probably good at a whole lot of other things as well! 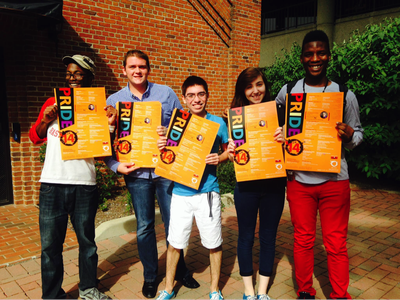 Now, we’re anticipating another first; April 25, we’ll be the first school to host a campus visit day for LGBT high school students! We are calling it Cardinal OUTLook Day (get it?) and it’s a partnership between the LGBT Center and the Diversity Recruitment folks to show off all these firsts and convince students that this is the school for them. We’ll even host a special lunch conversation for parents, to answer questions and make sure that they know how serious we are about our commitment.

Know someone who should be there? Tell them to RSVP and be part of something groundbreaking!