Jeremiah Chapman, Woodford R. Porter Scholar and 2012 UofL graduate of the Speed School of Engineering, has been chosen as one of Forbes Magazine's 30 Under 30, "a celebration of millennials who are out to change the world with innovations, energy and persistence.”

The prestigious award includes 600 men and women under the age of 30 across the country from various categories; Champman, 24, was honored amongst 29 other young professionals in the Manufacturing & Industry category. Chapman, a duPont Manual High School grad and Louisville native, pushed through less than ideal circumstances growing up and as a student to become the highly successful and innovative engineer he is today.

Grace Schneider of The Courier-Journal, details more of Jeremiah's story:

"Youngest of four, Chapman's great grandmother kept the family together at 18th Street and Algonquin Parkway in western Louisville. Their father was never around, and their mother came and went, Chapman and his sister said.

'We all knew we had to pull our own weight,' Xavia Chapman recalled, and that meant passing cash from part-time jobs to pay for household expenses.

Chapman worked as a ride operator at Kentucky Kingdom two summers, then rode two buses to reach Target in Jefferson Mall, where he earned $6.25 an hour at night after school and on weekends. To avoid standing out as the poor kid at duPont Manual High, he said, he ordered clothes on eBay. A guidance counselor looking at his mediocre record of B's and C's early in his junior year asked him if he expected to go to college.

'You're going to have turn it around to earn a scholarship,' Bryan Crady, now vice principal at YPAS, told him.

That lit a fire. His grade point average jumped 1.5 points and when he scored a 5, the top grade, on an Advanced Placement biology final, his confidence soared. 'That was when I changed my perspective,' he said. Using a Woodford R. Porter Scholarship, an award for African-American students, he entered U of L's Speed School, one of the university's most demanding undergraduate tracks.

The full ride, worth an estimated $48,000, was supplemented with $12,000 from the National Society of Black Engineers. The group awards designated funds to support a black Speed student who demonstrates academic excellence and financial need.

To pay for living expenses, Chapman worked as a resident assistant. There he met Frommeyer, a fellow RA two years his senior. Juggling a chemical engineering load, with labs, reports and 3 a.m. calls at the dorm nearly forced Chapman to drop out during his sophomore year.

'I would just always fall behind," he said, but leaving school seemed far worse. 'I felt like it would be quitting, and I was good at school.'" 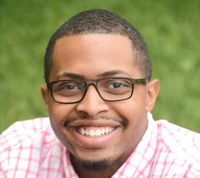 Chapman is now the founder of Crisp, a company that manufactures FreshFy, a tool used in deep fryers to extend the life of oil and thus help restaurants reduce costs. His company was recently the recipient of Louisville's Vogt Award.

Read more about Jeremiah's accomplishments after graduation, specifically in manufacturing for the restaurant industry in Louisville. Learn more about the Woodford R. Porter Scholarship at UofL. We are very proud of Jeremiah and congratulate him on his successes, while we look forward to his future innovations and advancements for the city of Louisville!