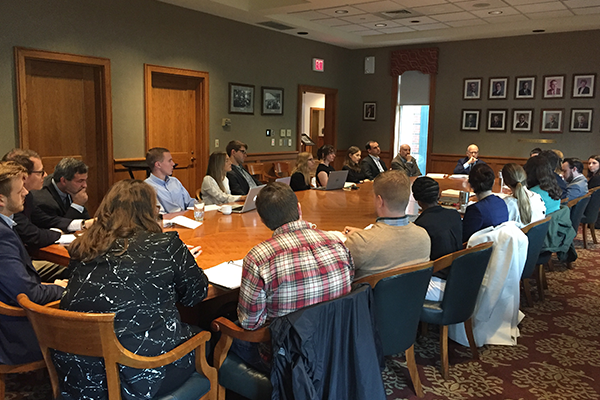 The University of Louisville hosted a symposium on the Future of the Commonwealth on Sept. 28, 2018.

Robust and intellectually stimulating discussions are a hallmark of legal education, and with a new symposium, the University of Louisville Law Review aims to facilitate more of those dialogues.

The first Future of the Common-Wealth Symposium, held September 28, 2018, brought together scholars from a variety of disciplines and perspectives to share their work on a common theme.

Scholars who presented at the event:

"The symposium was an amazing opportunity for the law review members to discuss issues regarding the future of the commonwealth and interact with scholars from around the world," says student Elizabeth Penn, editor in chief of the law review. "We all learned so much from the dialogue and are looking forward to the symposium becoming an annual law review event."

The articles discussed at the symposium will be published in a special volume of the law review.

"The law review is incredibly appreciative of all of the authors and speakers for traveling from near and far to be there. The topic, ideals and history surrounding the Common-Wealth were fascinating to learn about. We look forward to publishing these pieces," says Kylie King, symposium editor.