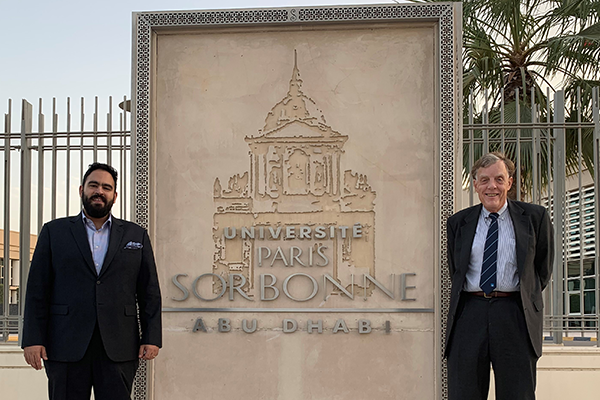 Professor Russ Weaver spent a week in November 2018 as a guest lecturer at Sorbonne University Abu Dhabi in the United Arab Emirates.

He taught a course on public comparative law, focusing on differences in constitutional structures between nations, as well as on free speech issues.

The university "has only a very small full-time faculty, and instead brings in prominent scholars for 12-day stints. They teach and then return to their primary universities. Although I was invited because I teach a lot in Paris, the overwhelming majority of the faculty are French speakers from French universities, but they come from an array of disciplines (e.g., law business, public health, politics, strategic affairs)," Weaver says.

"The students come from incredibly diverse backgrounds. In my class on comparative freedom of expression, I had students from the UAE, Bahrain, Djibouti, Lebanon (a television reporter who works in Dubai), the U.S. (the manager of a UAE television station), Romania and France.

"The classes function a bit differently than U.S. classes. For example, the Muslim call for prayer came right in the middle of my class every day. So, we would break for half an hour every day so that the Muslim students could go pray," Weaver says.

Weaver, a Distinguished University Scholar at the University of Louisville, is an internationally respected free speech scholar. He has taught and lectured in countries around the world.