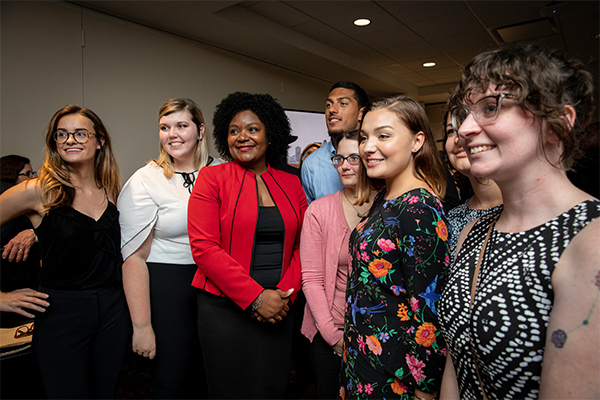 Sadiqa Reynolds, president and CEO of the Louisville Urban League, meets with students.

National and state leaders met at the University of Louisville on October 10, 2018, for a bipartisan panel on a topic that often unifies people from all political leanings: criminal justice reform.

In partnership with Justice Action Network, a bipartisan advocacy group focusing on criminal justice reform, the University of Louisville School of Law hosted the event, which featured prominent speakers:

The event was co-sponsored by several local law firms and the student chapters of the American Constitution Society and the Federalist Society.

The local support and bipartisan interest in the event were impressive, says Dean Colin Crawford.

“As legal educators, we know that the law has real-world impact. This is perhaps no more clearly felt than in the area of criminal justice. We were pleased to host this event with Justice Action Network that brings together bipartisan leaders to discuss this important issue," he says.

At the event, Justice Action Network also announced that it will fund four $5,000 fellowships for Louisville Law students.

"I thought it was fantastic that the Criminal Justice Reform discussion packed the room. It shows there is deep interest in the subject, and it speaks to the quality of the panel. The depth and quality of the discussion was wonderful, covering both the substance of what is wrong with our criminal justice system and the politics of trying to do something about it at the state and national levels."\

“It was a strong panel," he says. "And there was a great turnout from students and alumni.”