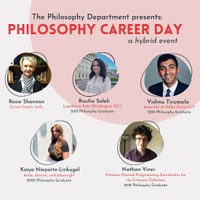 Kaiya was already involved in theatre before entering college. She found her calling as a playwright and director in local theatre, and uses her Philosophy training in both endeavors. Nathan’s internship at the Speed Cinema propelled him into the New York film scene after graduation. He pounded the pavement and knocked on some doors, but his exceptional training at UofL landed him his dream job as programming coordinator for the Criterion Channel. You can see his curatorial handiwork any time you turn on your TV.

Roufia interned in Washington after graduation, and her exceptional work qualified her for a quick promotion to the role of legislative aide for Rep. Angie Craig, a member of Congress from the 2nd District of Minnesota. And Vishnu, who graduated from Vanderbilt Law School, now works in DC for the prominent law firm of Sidley Austin. Speaking to current students, all four of these recent grads emphasized how the Philosophy major prepared them for the job market and the world of work. Our career day event also featured Rosie Shannon, a career coach from the UofL Career Center, who discussed internships and offered valuable information regarding career preparation.

What became abundantly clear during this event was the importance of internships in the modern job market. Internships enable students to build relationships with employers. Such relationships can turn directly into job placements, but even if not, these relationships provide students with hands-on career training and an excellent reference from a supervisor, priming them for job market success. If you are interested in hiring a Philosophy intern, please let us know! Or if you have some wisdom to share and would like to serve as a panelist for next year’s career day, please reach out to us at phil@louisville.edu. Our students will be delighted to hear about your experiences and career.