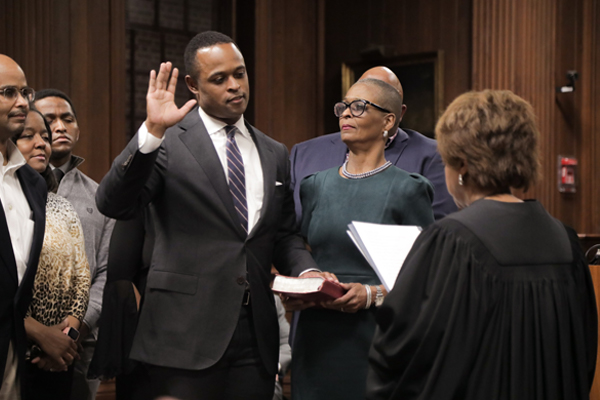 Daniel Cameron is sworn in as Kentucky's Attorney General on January 6, 2020.

Just after midnight on January 6, 2020, Daniel Cameron was sworn in as Kentucky's 51st Attorney General.

Cameron, a 2011 graduate of the University of Louisville School of Law, is the state's first African American Attorney General and the first Republican to hold that office in more than 70 years.

His swearing-in ceremony was held in Louisville Law's historic Allen Court Room and was attended by a crowd of supporters and colleagues. Also in attendance were Senate Majority Leader Mitch McConnell, who offered remarks during the ceremony, and Denise Clayton, chief judge of the Kentucky Court of Appeals and 1976 graduate of Louisville Law, who administered the oath.

As an undergraduate student at the University of Louisville, Cameron was a McConnell Scholar; he later served as the senator's legal counsel. In law school, Cameron was president of the Student Bar Association and a member of the Louisville Law Review. After law school graduation, he clerked for the Hon. Gregory Van Tatenhove, of the U.S. District Court for the Eastern District of Kentucky and entered private practice at Stites & Harbison and Frost Brown Todd.

Several of Cameron's supporters also shared their thoughts with the dean prior to the event:

"Daniel Cameron is exactly the kind of person we want in a public servant. He has both the personal character and the dedication and knowledge it will take to do an excellent job for the people of Kentucky. I don’t know anyone I would want my own children to emulate more or our political class to learn more from than Daniel Cameron!”
Dr. Gary Gregg, director of the University of Louisville’s McConnell Center

"When Elayne and I established the scholarship, it was motivated in large part by our belief that African Americans are underrepresented in the field of law. We also felt that the opportunities after graduation would be greater for those students at the top of their graduating class. As a result, in order to receive the scholarship, we require the applicant to be on law review and in the top 10% of their class.

"We also believe that, when given the opportunity, the brightest of these students will rise to the upper echelons of the legal profession. Daniel, and the other recipients, have more than fulfilled our optimism with their success. Thank you, Daniel, and congratulations, Mr. Attorney General."
Murray Klein, 1970 Louisville Law alumnus and founder of the Murray J. and Elayne B. Klein Scholarship in Honor of Professor William Read

"Brandeis has produced governors, senators, and 173 years’ worth of counselors and community leaders. But I predict that when Daniel’s career concludes, he will have done more good for our Commonwealth and our country than any Brandeis alum who came before him.”
U.S. District Judge Justin Walker, Western District of Kentucky

See photos of the ceremony.

See media coverage of the swearing-in at Louisville Law: