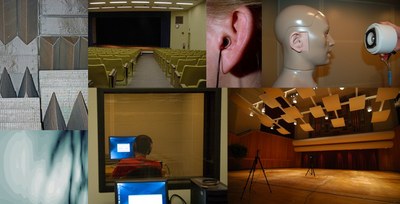 Auditory distance perception:  The perception of sound source distance provides spatial information to the listener that in certain circumstances can be critical for survival, such as determining the proximity of a predator or prey, particularly in the dark or when sound sources are outside the field of view.  It is surprising, therefore, that auditory distance perception has been understudied relative to directional sound localization.  This gap in knowledge has motivated our work in this area.  Central findings from our research include a demonstration of the independence of sound source loudness and the perception of source distance, demonstration of the importance of reflected/reverberant sound for distance perception, and the demonstration that although humans can flexibly combine information from multiple acoustic cues to distance, systematic biases in perceived distance exist.  Newer work has shown that monaural distance coding in humans depends critically on both reverberation and amplitude modulation characteristics of the sound source, and that these two stimulus attributes work in concert to code distance within neurons of the rabbit inferior colliculus.

Multisensory integration in auditory space perception:  Our previous work in auditory distance perception indicates that perceived distance in humans is systematically biased:  far sound source distances are underestimated, and near source distances are overestimated.  This is in stark contrast to visual depth perception, where distance estimates are highly accurate.  We have shown that the addition of visual depth information can dramatically improve auditory distance accuracy and also lower the variability in auditory distance judgments.  Similarly, we have shown in the domain of directional sound localization that multisensory input over time can facilitate improved accuracy by reducing front/back confusion errors.  These results provide important groundwork for developing methods of improving orientation and navigation abilities in humans when information from a sensory modality is missing or degraded, such as for blind navigation using sound.

Virtual auditory space technology and validation:  Virtual auditory space (VAS) technology enables accurate and precisely controllable simulation of listening experiences that mimic those resulting from real sound sources in real sound fields.  This technology has been transformational for the study of spatial hearing.  Our research has made extensive use of VAS technology and has been involved in various efforts to validate, improve, and apply the technology to new areas of study.  For example, we were the first to demonstrate that highly controlled VAS methods can result in virtual sounds that are indistinguishable from real sound sources.  This is the strongest form of validation for the VAS method.  We were also the first to apply VAS technology to the study of auditory distance perception.  More recently, we have validated the use of VAS technology for simulating the relevant physical and perceptual attributes of small room acoustics.  Application of VAS technology will continue to have a major impact on the field of hearing science.

Hearing Impairment:  We have been interested in a variety of topics including: potential correlates to “hidden” hearing loss, binaural phase sensitivity, and the effects of binaurally-linked dynamic range compression in hearing aids.  These studies represent collaboration between the Heuser Hearing Institute, Sonova, and the University of Louisville.  We have also collaborated with Dr. Paul Reinhart and Dr. Pam Souza in studies related to the effects of reverberation on hearing aid compression and processing strategies.