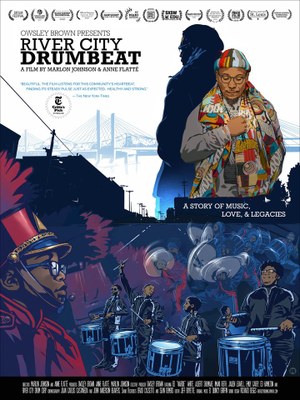 The Employee Success Center and Office for Diversity and Equity are partnering to build conversations about racial justice, mentoring, West Louisville, and music through the documentary River City Drumbeat. Faculty, staff, students and retirees can get a free special access link to view the film, and then attend a special event hosted by Neeli Bendapudi on March 31st at 3:00 pm to talk with producer Owsley Brown, directors Anne Flatte and Marlon Johnson, founder Ed White, and Executive Director Albert Shumake (Ed and Albert are both featured in the film).

River City Drumbeat is a powerful story of music, love, and legacies set in West Louisville. Edward "Nardie" White devoted his life to leading the African-American drum corps he co-founded with Zambia Nkrumah three decades ago. Together they inspired youth from their West Louisville neighborhood to thrive by connecting them with the art and cultural traditions of their African ancestors. Now Albert Shumake, whose destiny was shaped by the drumline, must take up the mantle for the next generation. Meanwhile, student drummers Imani, Jailen, and Emily navigate adolescence and life changes. The film follows this creative community of mentors, parents, and youth making their way in a world where systemic forces raise obstacles to fulfilling their dreams.

UofL faculty, staff, students and retirees can view the film via Microsoft Stream. Your UofL user name (UofLuserID@louisville.edu) and password are required to access the link.