Now nearly 400 years later, Louisvillians will have a chance to look upon the world-altering publication – the first book of Shakespeare’s works, the first book devoted exclusively to dramatic works, and the first book marketing not only the words it contained, but the person who put them on the page.

Shakespeare’s Fourth Folio, published in 1685, served as the basis for the first edition in modern English of Shakespeare's works Archives & Special Collections at UofL houses a copy in its permanent collection.

The 393-year-old book that changed literature, culture, and history sparks events across the city

Today buying the collected works of William Shakespeare is as easy as logging in to Amazon.com. Or visit Carmichael’s Bookstore and peruse the well-organized, brightly lit shelves of the drama section, where you’re sure to find Shakespeare’s work on display.

But in 1623, you’d need to slosh through the mud and refuse of 17th century London to get to St. Paul’s Churchyard. Among the crowds of people gathered to hear sermons from Paul’s Cross and purchase penny pamphlets announcing breakouts of the plague, would be bookshops and open-air bookstalls selling Ovid’s Metamorphoses and quartos of Shakespeare’s Richard III.

“London at that time was known for its smoked exteriors and strong odors – primitive sewage – and the book trade had to rely on other ways to attract customers beyond the odoriferous,” said Prof. Hristomir Stanev (English), whose latest book is, Sensory Experience and the Metropolis on the Jacobean Stage (1603-1625). “And rely it did. Broadsheets advertising new plays or any new text on something topical were frequently employed, and so were the vocal chords of ‘criers’ who advertised the news or the latest quarto edition of a popular play.”

Seven years after Shakespeare’s death 400 years ago, the first collection of his work – 36 comedies, histories, and tragedies including 18 that had not yet been printed – was published by William Jaggard and sold by Edward Blount “at the sign of the Blacke Beare near St. Paul’s Church.” 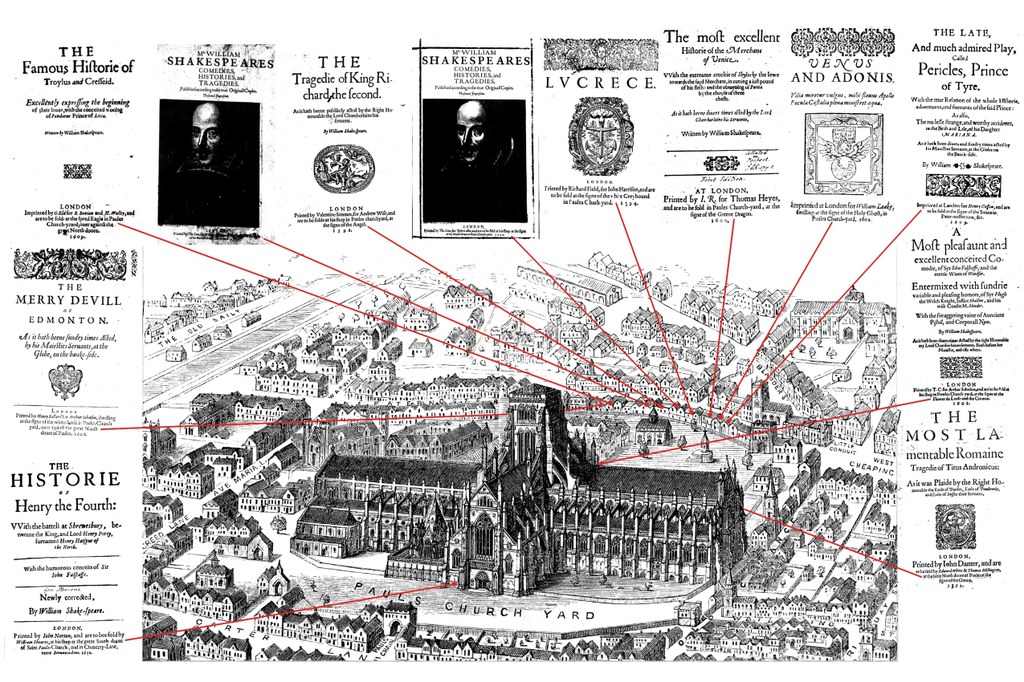 It was to Jagger’s print shop, where press men collected urine in a bucket to bind ink to the page, that Shakespeare’s former friends and fellow actors in the King’s Men, John Heminge and Henry Condell, brought the playwright’s works. The First Folio was based on what decent and passingly accurate quartos Heminge and Condell could find along with manuscripts, drafts, and sides – long pieces of parchment paper with only an individual actor’s lines written on them. Appreciation of Shakespeare was not necessarily then what it is now. 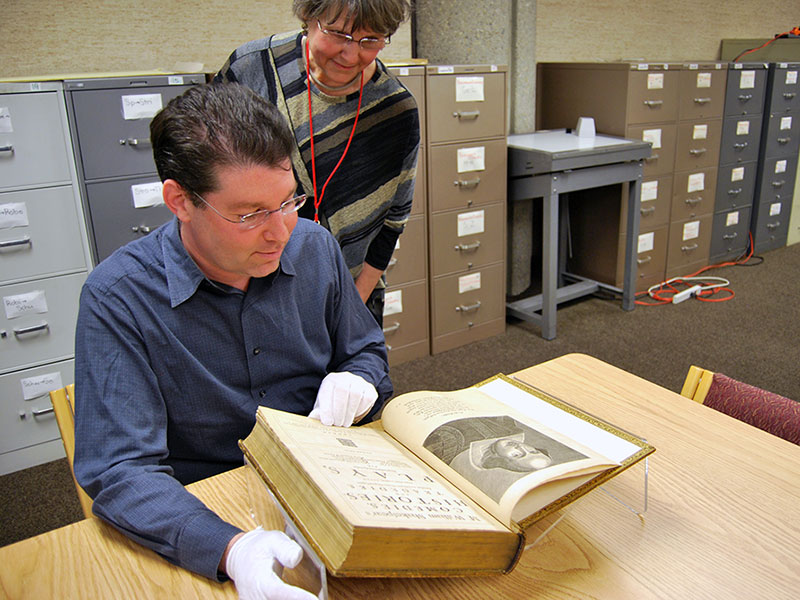 “The significance of the First Folio cannot be overstated – indeed, it’s become something of a commonplace to say that without the First Folio, there would be no Shakespeare,” said Prof. Andrew Rabin (English), director and coordinator of Will in the Ville events and programming for UofL. “Only seventeen of Shakespeare’s plays were printed in his lifetime, so without the First Folio more than half of his works – including such masterpieces as Macbeth, As You Like It, Twelfth Night, Julius Caesar, and The Tempest – would not have survived.

“More broadly, the Folio’s large format, elaborate frontispiece, and high quality materials mark it as a status object, a sign that literature had come to occupy a central place in English culture. Before Shakespeare, literary composition, and playwriting in particular, had been seen as either a hobby for aristocrats or a pastime for individuals without legitimate employment. The popularity and influence of Shakespeare’s plays lent literature a prestige it had never before enjoyed,” he said. “The publication of the First Folio was a sign that literature had arrived.”

The approximately 750 First Folios printed were purchased by individuals, for city collections, and sold by booksellers in St. Paul’s Churchyard alongside the cacophony of pealing church bells, barking dogs, and criers advertising religious works.

Now nearly 400 years later, Louisvillians will have a chance to look upon the world-altering publication –  the first book of Shakespeare’s works, the first book devoted exclusively to dramatic works, and the first book marketing not only the words it contained, but the person who put them on the page. And not only that, the University of Louisville’s Archives & Special Collections department will have on display their copies of Shakespeare’s 1685 Fourth Folio, Benjamin Jonson’s 1616 First Folio, and Beaumont & Fletcher’s 1647 folio. All will be part of the Frazier History Museum’s exhibition First Folio! The Book That Gave Us Shakespeare from November 10 through December 10, in partnership with UofL and the Louisville Free Public Library.

“The University of Louisville is honored to have helped play a role in bringing the First Folio to our community,” said Neville Pinto, Interim Provost. “The historic significance of this compilation is beyond compare, and we’re pleased to make it available to our students, faculty and staff. Departments throughout the university look forward to bringing Shakespeare to life for our campus community and the region through performances, lectures, exhibits and other programming.”

In addition to the exhibition at the Frazier Museum, more than ten departments in the College of Arts & Sciences are collaborating, as well as performances and presentations by the UofL School of Music, The McConnell Center, and the Office of the Provost. UofL is sponsoring a tremendous range of events and programming, but some of the most prominent include:

There will be a host of smaller events and collaborations with organizations around Louisville in the run-up to the First Folio! Exhibit. For information on exhibits at the Louisville Free Public Library, and elsewhere in the community, visit LFPL’s Will in the Ville.