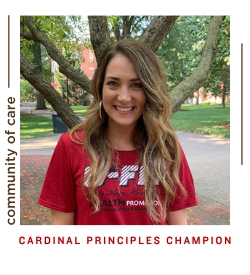 From the nomination: "Jenna has been essential in creating a culture on campus of compassion, gratitude, kindness, and healthy mentally and physically. She was a lead facilitator on the Growing Mindfulness Initiative, a campus-wide collaborative effort between the Office of the President and The Employee Success Center that is built around the Cardinal Principles to cultivate a Community of Care through mindfulness. Under this initiative she has coordinated weekly mindfulness programming and services for the cardinal community including meditations and yoga. She most recently coordinated the facilitation of the SKY Happiness retreat for Faculty, staff and students with raving reviews. Additionally, she is constantly requested by departments to lead meditations and workshops on self care and compassionate leadership. In a time where the cardinal community was struggling, Jenna provided a space for rest, relaxation and pause." 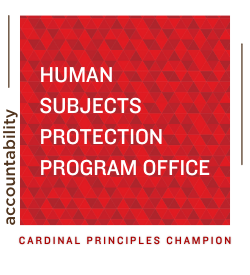 From the nomination: "Our office reviews research submissions that involve human participants and serves as the administration office in support of the UofL Institutional Review Board (IRB). In 2020 we had to transition our whole operation as well as the IRB meetings remotely. We had a high volume of time sensitive work to have IRB reviewed, as the COVID research world began to boom. Our office supports the UofL research mission by ensuring research participants are protected and informed. Cathy Carter and Robbi Devers came up with a fantastic idea to bring the Cardinal Principles to the front of what we do everyday. They wanted to motivate our team by making the Cardinal Principles our driving force. They pitched the idea of going through a different letter of the Cardinal Principles monthly at staff meetings. They also "sold" the idea of having a different team member in our office present/lead a discussion on the different letters. Robbi and Cathy lead us off with our first group discussion on Accountability followed by Agility. They were both very timely discussions for our group to have as it was right in the middle of the pandemic when Agility and Accountability were key to our success as a team. For each principle, we discuss what it means and then how it impacts our work, our team, and our external relationships. We've almost finished all of the letters and we plan to start back at the top and go through them again. Each letter so far has been presented by a different member of our team. We've had staff members lead discussions who are stepping out of their comfort zone to do something that is not easy for them. Our HSPPO team has bought in to the importance of putting the Cardinal Principles at the center of our work. While our whole HSPPO team is full of Cardinal Principle Champions, Cathy and Robbi have held us Accountable to learning and implementing them throughout the year." 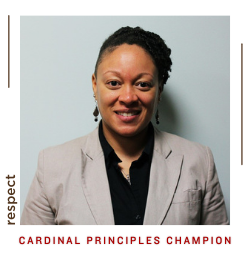 From the nomination: "Tamara has a rare and extraordinary ability to subvert existing hierarchies to uplift and empower students. She is ceaseless and unwavering in highlighting students' strengths, making space and creating platforms for them to speak their own truths, and supporting them to carry out their visions and plans, including when those plans conflict with those of university staff or administrators. At the same time, she is able to see multiple perspectives and to act as a liaison and mediator, whether that be between two students or between students and university officials, through her ability to convey respect for the perspectives of all parties." 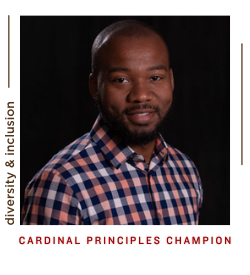 From the nomination: "Jonathan has gone above and beyond his formal duties to come up with some creative initiatives that increased the number of African American and Black students coming to the school, and he greatly increased the Latinx and first-generation student population in the Speed School. All these gains are indeed due to the methodical and strategic efforts undertaken by Jonathan since he was named Director of Admissions." 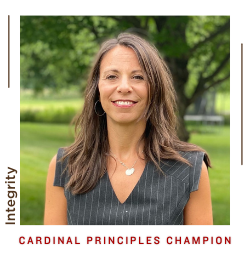 From the nomination: "Julie exhibits every single one of the cardinal principals in her daily work with University Advancement. I remember the first time we met with Julie as a team, after hearing from us what it was that we needed in a leader, she also shared what her most important values were and what she expected of us. One of those values was integrity, and the importance of maintaining integrity both externally and internally for the success of our team as well as in the best interest of the University. She doesn’t just expect this of us as we deal with one another as well as with donors, but she also walks the walk. I have seen her time and time again display herself as an honest leader, one that extends grace and always assumes good intention." From the nomination: "During the pandemic, Karen Thompson has demonstrated several Cardinal Principles, but I believe the principle of Noble Purpose is particularly good at capturing what she has done. Karen has faithfully come into the office during the pandemic, even when work-from-home was an option. When I ask her why she keeps coming in, she always offers a response about how the work needs to continue and the faculty need the support. Karen believes in the work being done in our department and has consistently demonstrated that, particularly over the past year. Her belief in the noble purpose of our collective work has definitely helped the department's faculty weather the storm of 2020-21, but it has also helped to shine a bright light on how her kindness, generosity, and sense of care are too often under-appreciated. Karen's commitment and selflessness have always been central to her work at UofL, but are often overlooked because her name is rarely attached to the final products coming out of the department. The past year has made it abundantly clear, however, that things would fairly quickly start coming apart at the seams if she wasn't there to keep holding it all together." 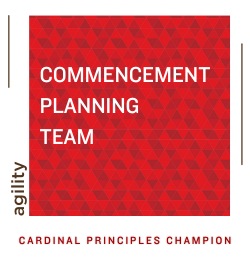 From the nomination: "This team demonstrated agility throughout the past 14 months. This team recommended the postponement of May 2020 commencement due to the pandemic and began planning for a virtual celebration to honor what would have been the Spring 2020 commencement date. This team then pivoted to planning the historic virtual commencement ceremony in December 2020 honoring all 2020 graduates. The team then began meeting weekly in January to plan and execute a return to inperson commencement exercises that were focused on celebrating the graduates as safely as possible, following strict Covid safety protocols." 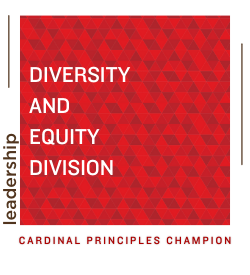 From the nomination: "The DEI unit are leaders without comparison at this University. At a time when everyone must stop, step back, and let the DEI unit lead, they have often been spotlighted only as a way to hold of examples of anti-racist work by the University instead of being centered as the leaders and experts in this work that they are. Despite this, the DEI unit has stayed the course of their Noble Purpose and have stood up and pushed back and led to try to make a difference in this campus and community. Even when they receive messages that their policy recommendations, messages, or trainings are "too much" or "not realistic" or "dont play nice enough" the DEI unit continues to speak-up and out to try to make the action that is so needed take place. Oftentimes, speaking out in this way can feel it is at risk of losing the support and employment because these are the hard messages and truths we all must face to truly be anti-racist. And through this all, this group is as negatively impacted by what's happening in the state and country at large as anyone, if not more, and continue to speak out and lead. As we move forward this group will most likely continue to be instrumental in the leadership of the CARA as the agenda must move from a dream into realities. Its important to start recognizing this teams leadership and as a phenomenal example of the Cardinal Principles in everyway."

Saying thank you or sending congratulations can make all the difference in someone's day!