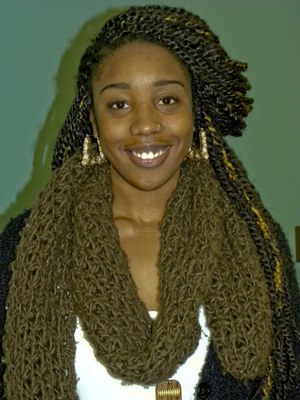 Ali Scholar Brina Joiner and Other U of L Students Head to Ferguson, MO In Reaction to Death of Micheal Brown

When Michael Brown, an unarmed black man was shot to death by a white police officer, it set about a chain of protest, civil unrest, and controversy not only within the Ferguson community, but also on a local, national, and international level.

For UofL Student and Ali Scholar, Brina Joiner, it was a matter she believed needed immediate attention and action. She felt the situation connected immensely to what she had just learned while on her trip to Rwanda with the other Muhammad Ali Scholars in May 2014.

“When I heard about the Mike Brown situation, I honestly just thought back to what I learned in Africa,” she says, “We all have to be there for each other no matter what.”

The thing that touched her the most however, was when she noticed the tweets of moral support sent by Palestinians to the Ferguson community.

So through some phone calls and usage of social media, Brina spent a few days calling some friends she felt would be interested in driving to Ferguson to protest and on August, 17th, she along with a few others got together in her car and drove to the Missouri community to engage in a collective peaceful protest against the unjust police brutality going on.

Joiner admits she did not know what to expect when she got to Ferguson. The only information she knew was about the violent outbreaks shown on the media.

“I was very shocked at how different things were there, compared to how they were being shown in the media!”

The structure, strong community, and peaceful protest that greeted her there made Brina realize she wanted to do more.

“At first it was just about protesting alongside everyone else there, but afterwards, when I saw the huge difference in what was actually going on verses what was being shown in the media, I realized I wanted to do something to create tangible change.”

Brina had originally videotaped the protest with the intention of creating a small video to show a few friends and as a way to give back to the community, but after witnessing what was going on in Ferguson with her own eyes, she posted her video on various social media outlets. Her video shows the warmth and compassion shared by the protestors. More recently, Brina did an interview for the weekly podcast “Strange Fruit” on the local national public radio station, WFPL, in the hopes of doing all that she can to show her support and spread the word about what is really going on.  The “Strange Fruit” weekly podcast is co-hosted by Dr. Kaila Story who holds a joint appointment in Women's and Gender Studies, and the Department of Pan-African Studies at the university.

“What’s lacking right now is open dialogue,” says Brina, “and the media isn’t helping matters. That is the main reason for me creating this video.”  According to Brina, a community is peacefully coming together to protest an act of injustice in Ferguson. However, all the media hype is making this simple act to be something entirely different.

“Being able to do fun stuff for the greater good,” she says with a smile, “that’s what life is all about.”

AliScholar Mahogany Mayfield, who also is President of the Association of Black Students (ABS), led a campus-wide forum to discuss the issues that led to the death of Michael Brown and the protests in Ferguson on September 11, 2014.  According to ABS President, Mahogany Mayfield, “The discussion will touch on what has and is taking place in Ferguson, but will surely not be limited to that particular case.  Our focus is on moving forward, looking at what we as a city, as a university, and as individuals can do to avoid future happenings such as the Mike Brown case.”   Ali Scholar Brina Joiner also participated in the panel discussion at this event which was co-sponsored with the Student Government Association; Vice Provost for Diversity and International Affairs; the Commission on Diversity and Racial Equality (CODRE); the Cultural Center; the Anne Braden Institute; the Muhammad Ali Institute for Peace and Justice; the Department of Pan African Studies; and the Black Faculty/Staff Association.  The discussion began with the death of Mike Brown in Ferguson, Missouri but also pinpointed the root cause of the injustice and ways in which individuals can take action against what is going on right now.

“In my opinion, the event was definitely something that is needed right now,”  says Ali Scholar Aaisha Hamid, “It not only drew attention to the unjust circumstances which ended Mike Brown’s life, but also pinpoints the prevailing injustice in our system and calls people to action in combatting the emerging issues brought to light with the course of events that transgressed in the Missouri community.”

To read more about the Ali Scholars program and their trip to Rwanda in May 2014, go to this link: http://louisville.edu/uofltoday/campus-news/playing-in-the-mud-ali-scholars-in-rwanda-make-unexpected-discovery