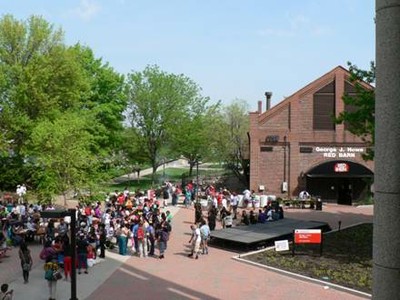 Each year the Division of Student Affairs provides need-based scholarships to assist with student academic pursuits. These three endowed programs to date have provided over $97,000 to UofL students since 1988. These awards are a tribute to three individuals who gave tirelessly to make the University of Louisville a better place: Mrs. Florence M. Strickler, Dr. Harold Adams, and Dr. Dennis C. Golden.

In 1987, $5000 was contributed to the Red Barn in memory of Harold Adams, the first Vice-President of Student Life at the University of Louisville. The Adams Fund provides scholarships to support freshmen students hailing from two high schools in Henry County, KY, Straight-from-the-Heart Awards of $50 to provide resources for students in need. The fund also provides additional emergency awards to students based on financial need.

To apply Apply for the Harold Adams Award.

In 1992, the Red Barn Alumni Association established this endowment with a $5000 donation for scholarships to UofL students. The late Mrs. Strickler was the wife of Dr. Woodrow M. Strickler, the President of the University of Louisville during the founding of the Red Barn in 1969, and she is affectionately known as the "First Lady of the Red Barn". Each year, four $400 scholarships are awarded through this endowed fund.

The Torchbearer Endowment was established in 1996 through a $10,000 contribution from alumni and friends to the University through the efforts of Dr. Dennis C. Golden, who served as Vice-President of the University of Louisville. Four $400 scholarships are awarded annually through this endowment, two of which are named for Essie Jenkins, an outstanding university alumnae, and two in honor of Dr. Golden. In addition, there are four $300 scholarships granted through the ACCESS Office: the Dr. Bridgette Pregliasco Torchbearer Scholarships for Adult Learners.

This scholarship honoring Essie Jenkins was established in 1999 through the Torchbearer Program. Five $250 scholarships were awarded from 1999 through 2001 in her honor. Since 2002, two $300 scholarships were awarded annually in her honor. Beginning with the 2008 Spring Semester, one $400 scholarship will be awarded in her honor. Essie Cynthia Burnley Jenkins was the U of L College of Arts and Sciences Alumni Fellow in 1995. She received a Bachelor of Arts in history and political science from the Louisville Municipal College in 1945. Essie Jenkins's professional career began as a Public Librarian in Queens, New York. In 1982 she was elected Assemblywoman of the 29th District of Queens, New York, becoming the first black woman elected to public office in Southeast Queens. She served in that capacity for six two-year terms.

This scholarship honoring Dr. Bridgette Pregliasco, Assistant Vice President for Student Life from 1995 to 2002, was established in 2001 through the Torchbearer Program to provide financial resources for adult students.