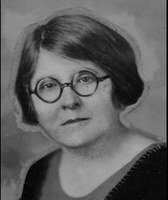 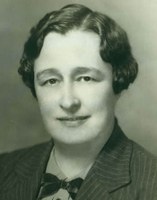 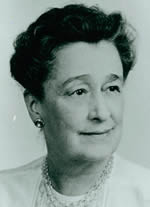 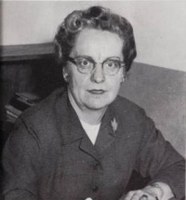 She was born in Brazil. Indiana, to John and Ethel Nickel on July 16, 1914. Doris attended public school in Terra Haute, Indiana, and then college at Indiana State Universiy. She then obtained her Master's degree from Indiana University.

In addition to her many duties as Dean of Women, Dean Nickel served as Advisor for Panhellenic Council, was an honorary member and advisor of Mortar Board, Secretary of the Student Aid Committee, and oversaw the women’s residence halls.

Kathleen Drummond, a close friend for 75 years, recalls the appreciation expressed by U of L coeds Doris served with care and compassion. She was also active in numerous professional associations and served as President of the U of L Women’s Club.

She married Cecil Stokes in 1960 and they were active members of Christ United Methodist Church until he died in 1992 and she moved to Arizona in 2006. She attended a United Methodist church there.  Doris Nickel Stokes passed away in Tucson, AZ, on May 16, 2010. 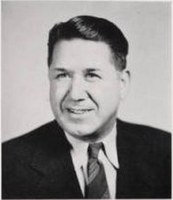 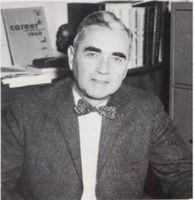 coach before becoming Dean at the University of Louisville. He received his B.A. and M. A. degrees from the University of Kentucky where he earned honorable mention on the All-American Basketball Team. During World War II, he served in the Navy. Dean Lawrence was a member of Omicron Delta Kappa, The National Association of Student Personnel Administrators, the National and State P.E. Association, and Chairman of the Student Aid Committee.

He received his Bachelor of Science, Master of Education and Ph.D. in Educational Leadership & Organizational Development from UofL, and has served as an adjunct instructor for graduate programs at Radford University and the University of Louisville.

A 1999 graduate of the Gehring Institute, Dr. Mardis has also previously served as the site coordinator and faculty member for the NASPA/SACSA New Professionals Institute, was the NASPA Kentucky Director for three years, and served on the NASPA Region III Board.  He served two years as the ASCA National Coordinator for Communities of Practice on Threat Assessment and Behavioral Intervention Teams. He also served as the NASPA Excellence Award Chair for Violence Education and prevention, Crisis Management, and Campus Security.

Dean Mardis is passionate about providing a quality student experience for all students and has been a dedicated champion of enhancing student life at the University of Louisville.