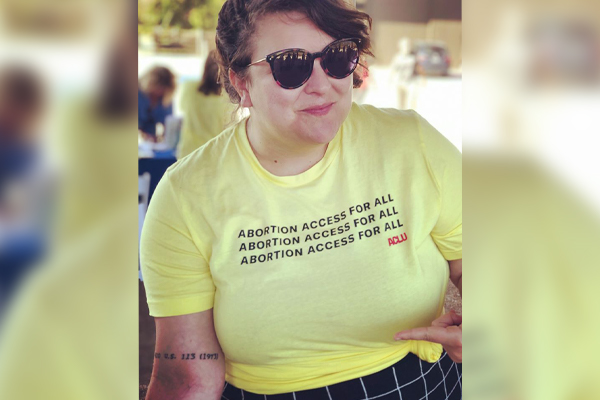 Thanks to a fellowship from national reproductive justice nonprofit If/When/How, graduating Louisville Law student Lauren North will be able to continue working in two of the areas she is most passionate about: voter engagement and advocating for the rights of women and girls.

North, who will graduate in May 2020, plans to begin the one-year fellowship in September — just as the presidential election is gearing up.

"Safe to say, this will be an exciting election season," North says, noting that how the election will proceed in the wake of — or during — the coronavirus pandemic remains to be seen.

If/When/How matched North with Atlanta-based Women Engaged, a nonprofit that develops policy recommendations, conducts research and organizes initiatives with and for women and youth of color.

With Women Engaged, North's focus will be on voter engagement, including registration, conducting programming, developing priorities and working with community partners.

Overall, her work will be focused on "ensuring that the communities that are most affected by decision-makers have a hand at putting them in office, particularly as it relates to wellness, health and bodily autonomy."

North has a background in campaign politics: she worked for the Obama campaigns in 2008 and 2012 and for the administration in field and communications roles. She has worked in Washington DC and in states across the country but came to Louisville Law in part because "I wanted to commit myself to making my home state better and more equitable."

Her position with Women Engaged also fulfills her commitment to remaining and working in the American South.

"I think the most important work is in states where [reproductive rights] are most at risk," she says.

North says her education at Louisville Law has equipped her to follow her dreams and names several professors — Jamie Abrams, Sam Marcosson, Laura McNeal, Shelley Santry and JoAnne Sweeny in particular — who were especially influential and supportive during her law school career.

"I have been very thankful for Louisville Law and the emphasis it puts on public service and the support I've gotten from faculty and staff. I'm leaving law school with a better understanding of the world I'm entering and the considerable work left to do," North says. "I'm thankful that I came to law school and in particular that I came to Louisville. It has set me on a path that I hope will mean justice for more people."

Read a Q&A with North and If/When/How.