I think, therefore I INSPIRE

Meet Art History Professor Christopher Fulton. Prof. Fulton joined the College of Arts & Sciences in 1999. With a background in Renaissance art, he recently began investigating Mexican art and co-curated an exhibition of works by David Alfaro Siqueiros. He is currently preparing books on Siqueiros's creative practice and on Milton Rogovin's photographs of working people. 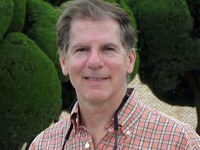 Prof. Christopher Fulton joined the College of Arts & Sciences in 1999. With a background in Renaissance art, he recently began investigating Mexican art and co-curated an exhibition of works by David Alfaro Siqueiros. He is currently preparing books on Siqueiros's creative practice and on Milton Rogovin's photographs of working people.

In this Q&A, Prof. Fulton lets us in on the inspiration a good mentor can provide and why you, too, should try to finish that Nabokov.

Current Research Focus: My current project involves the relationship of art and architecture in Mexican public development projects of the 1950s. This study involves a collaboration with Prof. Georg Leidenberg, who came from his home base in Mexico to UofL as visiting professor last year.

I am also preparing an exhibition on the documentary photographer Milton Rogovin, in collaboration with Elizabeth Reilly, of UofL's Photo Archive. The show will open at the UofL Hite Galleries in October.

A further line of research is protest art for May Day parades in the United States during the 1930s.

What was the most memorable class you took as an undergrad? Why? That would be the Kennan Seminar, "Politics as a System of Power," a team-taught course led by two highly intelligent and strong-willed professors. The seminar challenged students to read significant and often difficult texts, and then make inferences from them. It produced a lively, sometimes heated, give-and-take, and I was thrilled to leap into the fray.

What is the biggest achievement in your career thus far? That's hard to say, since the different achievements are impossible to compare. As an educator my biggest achievement is the organization and direction of two study-abroad programs for Kentucky Institute for International Studies (KIIS), of which UofL is a consortium member.

This winter over the break, I will lead a group to Mexico where we will study the Maya people and culture. A professor from UofL's Anthropology Department will join me, as will a professor of History from Bellarmine University. Anybody can apply and earn credit for the course. For more, go to www.kiis.org, or contact me directly at cfulton@louisville.edu.

Did you have any key mentors or people who deeply influenced who you are, what you believe in and what you’re committed to in your work and life? Who are they and how did they influence you? The man who most inspired me to think through problems logically and deliberately was Sir John Pope-Hennessy, a brilliant scholar of Renaissance art with whom I took classes and for whom I served as research assistant at the Metropolitan Museum of Art, where he was employed.

The man who represented for me the integrity of an academic was my dissertation advisor James Beck, a man of principle and immense generosity. There are others, too, who had an influence, such as Klemens von Klemperer, whose commitment to scholarship served an even stronger commitment to social justice.

What was the last book you read? Why did you pick it up? I am currently reading Nabokov's Ada, or Ardor: A Family Chronicle. It's hard to get into, as are most of his novels, but the eventual payoff is huge.