The McConnell Scholars Program is a prestigious leadership and scholarship program at the University of Louisville open to graduating Kentucky high school seniors. Ten students (one cohort) are added each year with a total of 40 McConnell Scholars (four cohorts) in the program at one time.

Scholars continually earn top positions in UofL campus organizations and excel in a variety of academic programs. Scholars major in a wide variety of fields including the arts, engineering, music, pre-medicine, pre-law and political science, among others. As part of their participation in the program, Scholars must at least minor in political science at UofL.

Current McConnell Scholars | In their own words: Scholars share about their undergraduate experiences and research.

Students selected for the program are chosen based on their strong record of commitment to leadership, scholarship and service. Applications, due December 15, are open to graduating Kentucky high school seniors and require an essay on leadership, resume and two letters of recommendation.

McConnell Scholars receive four years of enhanced academic experience under the direction of Gary L. Gregg, PhD. Programming focuses on the foundations of leadership and political and social thought in America.

Additional benefits include financial awards; mentored studies of leadership, citizenship and the liberal arts; international and domestic travel; opportunities to meet and engage with prominent national, state and local leaders; and access to the center’s alumni leadership network. 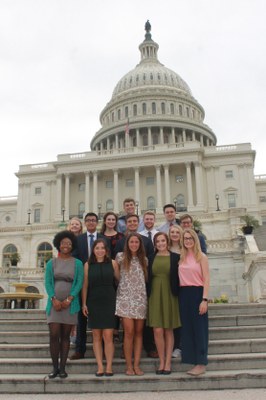