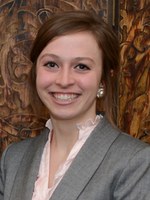 McConnell Scholar Mary Elizabeth Young (’16) was elected by her peers to serve as president of her local Chi Omega sorority chapter, Beta Gamma.

Young is an English and Spanish double major at the University of Louisville. She is also a member of the executive board of the Engage Lead Serve Board at UofL.

Chi Omega, founded in 1895 at the University of Arkansas, is a national fraternal organization with 178 collegiate chapters.