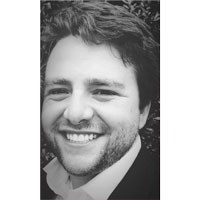 Much like his undergraduate career, when he was active in the Student Government Association, the College Democrats and as Chair of the McConnell Scholars Program, alumnus John Weber (’12) is taking every opportunity to be involved during law school.

Now, he represents his fellow law students as the 6th Circuit Governor and Delegate in American Bar Association (ABA) law student division and was named a fellow on the New Leaders Council, a highly-selective entrepreneurship training program.

At the ABA, Weber represents all U.S. law students and oversees functional operation of the law student division.

In addition, Weber works as a corporate law clerk with LG&E-KU and is a member of UofL’s Journal of Law and Education editorial board. He is also a legal writing teacher at Louisville’s Central High School, where he was recently named Outstanding Law Student Teacher.

“The practical leadership lessons that I learned both inside and outside of the classroom propelled me to opportunities with campus and community organizations,” Weber said. “Since my time in college I have leaned on the McConnell Center’s alumni network when I needed advice.”