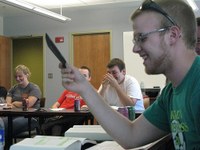 Scholar Max Morley, far right, references his pocket-size U.S. Constitution during a seminar on the role of U.S. Supreme Court.

The McConnell Scholars opened their Law and Public Policy educational enrichment series by perusing The Federalist Papers and Anti-Federalist writings. Their goal was to investigate the founding debates surrounding the creation of the American judicial system.

Of the three branches of government in the United States, the judicial branch received the least attention during the Constitutional Convention of 1787. The resulting Article III provides a vague outline for what has become a large and complex legal system.