(March 13, 2017) LOUISVILLE, Ky. – Pair considers the role of the presidency and the U.S. Constitution in professional development seminar in Virginia. 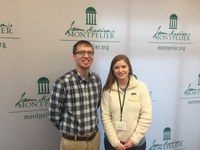 Kentucky teachers Kendrick Bryan and Annabeth Edens visited James Madison’s Montpelier in Orange, Virginia, this weekend for a professional development seminar on the presidency and the U.S. Constitution.

Both teachers are participants in the McConnell Center’s Teacher Scholars Program. Bryan is a teacher at LaRue County High School, and Edens teaches at Royal Springs Middle School in Scott County.

During the March 10 to 12 seminar, Bryan and Edens explored Montpelier, the home of James and Dolley Madison, and participated in a mock nomination process of a U.S. Supreme Court Justice. Madison is considered the “Father of the Constitution” and “Architect of the Bill of Rights.”

The three-day event was led by Michael Gerhardt, a constitutional law professor at the University of North Carolina, and Russell Riley, co-chair of the Presidential Oral History Program at the University of Virginia’s Miller Center. Both professors have authored books about American government.

Teachers from across the country applied to the professional development program, and participants were from California, Florida, Kentucky, New Jersey, New York, North Carolina and Virginia.