Sen. Mitch McConnell named one of the "Top Ten Most Intriguing Political Personalities of 2010"

(December 13, 2010) LOUISVILLE, Ky. - The New Yorker's Ryan Lizza includes Sen. Mitch McConnell as one of the "Top Ten Most Intriguing Political Personalities of 2010 (Who Merit Watching in 2011)." 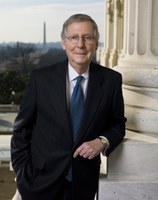 The New Yorker's Ryan Lizza has listed U.S. Senator Mitch McConell as one of the "Top Ten Most Intriguing Political Personalities of 2010 (Who Merit Watching in 2011)."

According to Lizza:
Mitch McConnell: Probably the most important Republican in America in 2010, McConnell is in the process of transforming from a senator who could effectively deny the White House important pieces of Obama’s agenda to a senator who can force the White House to embrace important aspects of the Republican agenda. The key to McConnell’s success has been his absolute confidence that Obama and Democrats will bear the majority of blame when Washington fails. Through the first two years of Obama’s Presidency this meant cost-free opposition to any Obama proposal. In the recent tax fight it meant a willingness—sometimes even an eagerness—to allow all the Bush-era tax cuts to expire if Obama didn’t accede to McConnell’s requests. Since McConnell’s continued success is built on the fact that the public doesn’t hold him responsible for governing, watch for Obama and the White House to gradually raise McConnell’s profile as their essential negotiating partner. Unless McConnell and other Republicans share in the pain of governing through these awful economic times, Obama is doomed.

The New Yorker article in full