(July 14, 2011) LOUISVILLE, Ky. - Ten students graduate from the McConnell Scholars Program and prepare for new chapters in their lives. 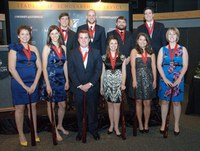 "This is an extraordinary class whose academic achievements have been nothing short of stellar," said Dr. Gary Gregg, director of the McConnell Center and the McConnell Scholars Program.

See where members of the Class of 2011 are headed next:

The group joins the McConnell Scholars' alumni network, which totals more than 150 Kentucky graduates. Our alumni enjoy successful careers in fields such as the arts, business, education, law, medicine, the military, music and politics, among others.