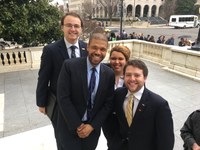 "We are really learning more about how Katrina affected (and to some degree still affects) the community," Bush said. "It has been a good experience."