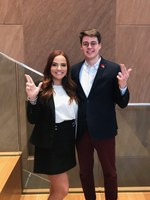 Canvassing in New Hampshire just days ahead of the primary, attending the John F. Kennedy New Frontier Awards and meeting FBI Director Christopher Wray — these are just a few of the opportunities four McConnell Scholars have experienced in the past three weeks.

"I feel like we're in a climate of fear right now in the United States--especially politics. The story seems to be that everything is bad, and it's only going to get worse. But I didn't leave Cambridge this weekend afraid or worried about the future of America. I left feeling inspired, reassured and motivated," said Barberie.

Based on what he learned at the conference, Barberie said he's already planning a series of campus town halls for the fall and looks forward to seeing more University of Louisville students engaged in the political process.

"There are enthusiastic, brilliant, compassionate students across the country who are dedicated to changing their communities for the better. We see it as our civic duty to foster an environment where citizens and residents feel engaged in politics regardless of their resources or upbringing," he said.

Baldock said the trip is not one she will soon forget.

“I was encouraged by thoughtful discussion with the students about what it means to be an American today,” Baldock said. “I am humbled that I was able to engage with such bright young minds and am motivated to have the same impact on my campus."

Will Randolph (’22) and Laura Hinkle (’22) attended the Naval Academy Leadership Conference as representatives of the McConnell Scholars Program a few weeks ago. The pair considered leadership lessons alongside naval cadets in Annapolis.

They heard from a NASA astronaut, as well as keynote speaker FBI Director Christopher Wray.

Hinkle (’22) said the conference helped her “recalibrate” her ideas about mentorship and reminded her that leadership and humility go hand-in-hand.

“Growing up, I’d never thought about mentorship as a formal concept. Finding true mentors has always been hard for me because I can be strong-willed and independent to a fault,” she said. The conference helped Hinkle realize that it is her responsibility to seek mentors who offer candid advice in order to further her leadership development.

Both opportunities are part of the McConnell Center's leadership development for McConnell Scholars to learn beyond the walls of the traditional classroom.

"Interacting with lecturers, panelists and professionals enriched my understanding of the critical role civic engagement plays in our democracy, and it has given me numerous resources to cultivate a more engaged campus community at UofL," Barberie said.