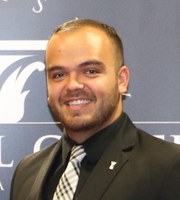 Jeremy Ball (’17), of Manchester, Ky., has been awarded a Fulbright English Teaching Assistantship to Malaysia. Beginning January 2018, Ball will teach English language and conversation to students for 10 months, as well as complete a social project.

“I'm incredibly excited and grateful for this opportunity,” Ball said. “I am thankful for every faculty and staff member at UofL that helped me achieve this honor, and I look forward to learning more about and experiencing Malaysian culture.”

The prestigious Fulbright Scholarship is the premier international exchange program of the U.S. government, and 13 McConnell Scholars have earned the award since 2002.

Ball graduated from the University of Louisville with a bachelor’s degree in political science and economics and a minor in international business in May. As an undergrad, he attended the Student Conference on U.S. Affairs at West Point and was selected to participate in the Harvard Public Policy and Leadership Conference at the Harvard Kennedy School. He was also chosen as a member of the Louisville Foreign Relations Committee and was named a Coca-Cola Scholar.

After his Fulbright experience, Ball said he intends to pursue a master’s degree in international relations.